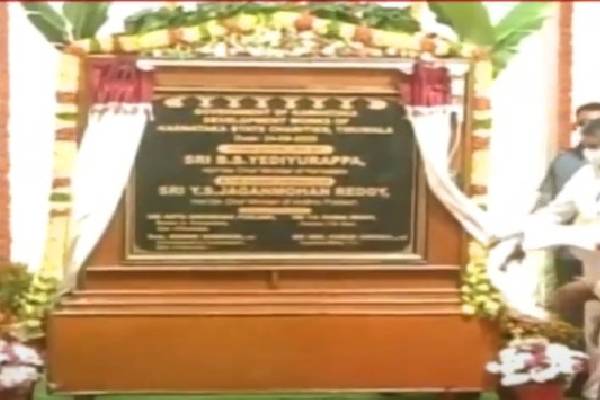 Both the Chief Ministers participated in the ‘Sundarakanda Parayanam’ event in front of the temple at Badhanirajanam mandapam at Tirumala. Later, both the chief ministers jointly laid the foundation laying stone for a multi-crore pilgrims complex and a marriage hall at Tirumala, the abode of Lord Venkateswara Swamy. The pilgrims complex and the marriage hall is estimated to cost of Rs 200 crore. With 305 rooms, 12 dormitories, 24 suites and four double suites, the guest house will be able to accommodate approximately 1,000 pilgrims

On Wednesday, Jagan Mohan Reddy had presented traditional ‘Pattu Vastrams’ (silk robes) to the processional deity on behalf of the state government. Jagan had carried the ‘Pattu Vastrams’ in a silver plate on his head and handed it over to the priests and officials of the Tirumala Tirupati Devasthanams.

Despite protests, the Chief Minister entered the abode of Lord Venkateswara Swamy on Wednesday to present ‘Pattu Vastrams’ on the behalf of the state government. Jagan wore traditional silk ‘pancha’ with the ‘namam’ (insignia) applied to his forehead.

After presenting the ‘Pattu Vastrams’ to Lord Venkateswara Swamy, he headed to Vakulamata Devi temple for ‘darshan’. Later, took part in ‘Garuda Seva’.
On Wednesday, the Opposition parties demanded that the Chief Minister respect the age-old practice of non-Hindus by signing the declaration form before entering the Tirumala shrine.

As per the TTD general rules, the Rule No 136 clearly states that only Hindus are allowed for darshan. Non-Hindus who wish to have darshan of Lord Venkateswara Swamy have to disclose their faith and give a declaration form to the TTD. As per conventions, since the Chief Minister is a converted Christian, he is bound by the TTD regulations to sign the declaration form. However, the Chief Minister was in no mood to respect the age-old Hindu traditions and practices.