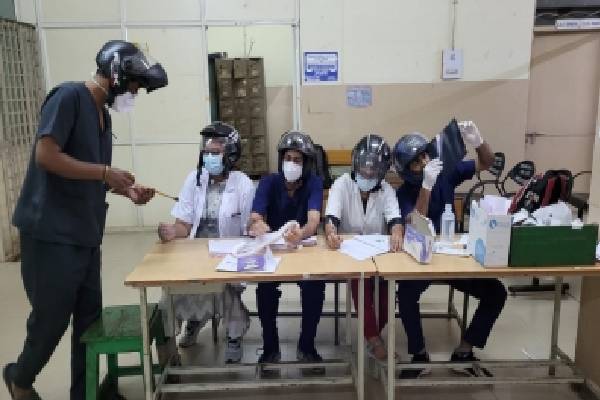 A section of junior doctors at government-run Osmania General Hospital in Hyderabad on Tuesday attended their duties wearing helmets as a mark of protest after a doctor was injured when a ceiling fan fell on her.

A final-year resident doctor from the Dermatology Department suffered head injuries after a ceiling fan broke off its hinges and came crashing down on her in the outpatient building. The incident occurred on Monday and hospital sources said the fan was 40 years old.

Highlighting the dilapidated condition of the city’s oldest hospital and its poor infrastructure, some junior doctors on Tuesday attended their duties wearing helmets.

The junior doctors staged a silent protest, demanding that authorities take immediate action to prevent recurrence of such incidents. They said despite repeated demands, no measures were taken to improve the infrastructure.

The doctors blamed negligence by the authorities concerned for the pathetic conditions in the over century old hospital.

However, OGH Superintendent Dr B. Nagender dismissed Monday’s incident as a sporadic one. He said all the problems faced by the hospital will be solved with the construction of a new building and pointed out that the issue is pending in the court.

This is not the first time that doctors have resorted to novel protest.

Pratibha, one of the junior doctors, recalled that in 2018, they wore helmets to highlight the dilapidated condition of the building. They had also conducted outpatient checkups under trees to highlight the problems faced by them due to lack of proper equipment and facilities.

Patients also complained of negligence by the hospital staff and lack of basic facilities like beds. Some patients were seen lying in open ground in hospital premises with their attendants holding saline bottles in their hands.

Located on the banks of river, Osmania Hospital is the oldest hospital in Hyderabad and one of the biggest state-run healthcare facilities in Telangana.

However, the hospital building is in a dilapidated condition and it has been in the news for all wrong reasons. Patches of plaster can be seen falling off while videos of stray dogs roaming around in wards, water and drainage pipeline leakage, patients lying on ground and even outside the building and heaps of waste have surfaced many times.

Last year, the hospital’s oldest block was flooded after heavy rains. The rain and drainage water had gushed into the hospital building flooding the corridors, alleyways and wards causing severe inconvenience to patients.

Patients and their attendants were sitting atop beds with ankle-deep water flooding the ward.

Videos of water flowing into the hospital and washing away various articles and hospital staff trying to stop the flow had gone viral over social media. Following the incident, the heritage block was closed.

In 2015, the state government had proposed to demolish the building on the ground that it is structurally weak and unfit to run a regular hospital. It wanted to build two towers, 24 floors each.

However, strong opposition from historians, heritage activists and prominent citizens forced the government to drop its plans to raze the building. The matter is currently being heard by the High Court.

Conceived after the Musi floods of 1908, the hospital was built by Mir Osman Ali Khan, the last Nizam of Hyderabad, and named after him.

Spread over 26.5 acres, the hospital has 11 major blocks. The inpatient block alone is spread over an area of 2.37 acres with a total bed capacity of 1,168 beds including 363 in super speciality wards. 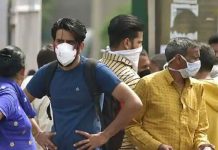 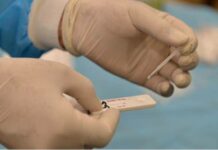