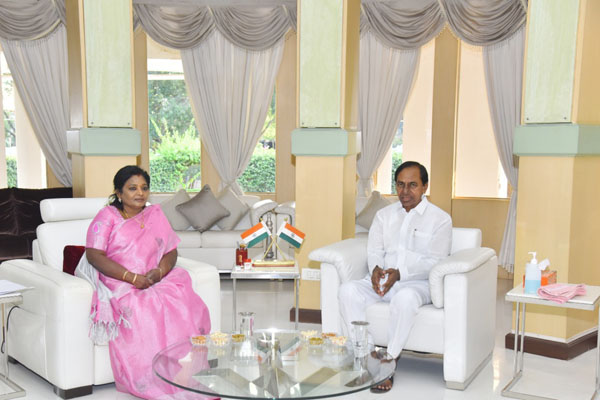 Chief Minister K Chandrasekhar Rao met Governor Tamilsai Soundarajan at Raj Bhavan on Monday to apprise her about the Covid-19 situation in the state.

The Telangana CM has discussed the measures the government has been taking to contain the spread of the virus, testing and treatment being given to the Covid-19 patients in various government hospitals in the state. The CM’s meeting with Governor Tamisai Soundarajan, a gynecologist, comes in the wake of her displeasure over the state government’s response to the pandemic. This is the first time that the Chief Minister has met the Governor after resuming his duties from Pragathi Bhavan nearly two weeks after he moved to his farm house in Gajwel. The CM had moved to his farm house after at least 30 employees contracted the infection.

The Governor had visited the Nizam’s Institute of Medical Sciences (NIMS), where several doctors have tested positive for the COVID-19 virus, to show solidarity with the medical professionals. She took to her Twitter handle to directly reach out to people.

Last month, she called Chief Secretary Somesh Kumar and Special Chief Secretary (Health) Shanti Kumari to Raj Bhavan for a discussion on the pandemic situation in Telangana. The Governor’s public criticism over the state’s response to the pandemic did not go down too well with the Chief Minister. The Governor was former BJP national secretary and president of Tamil Nadu BJP unit.

The KCR government had come under sharp criticism from the Opposition parties. While opposition parties have accused the state government of not doing enough to contain the virus, the Telangana High Court has also made some observations on the government’s performance. With the swell of new coronavirus cases continuing in Telangana amid growing criticism over low testing, the High Court had pulled up the state government directing it to submit a detailed report on medical equipment provided to the frontline warriors. The court also asked the KCR government to increase corona testing by using Rapid Antigen Test (RAT) in view of rise in Covid-19 cases in the state.