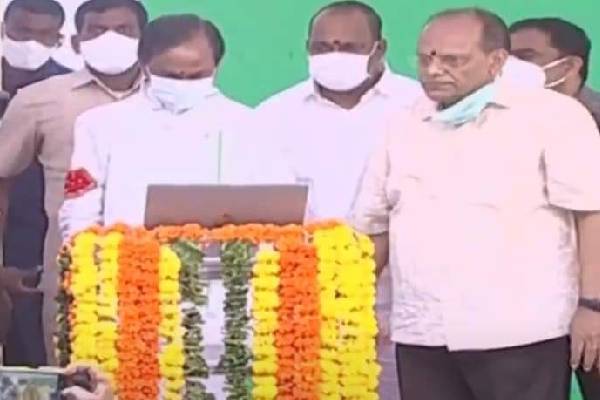 The Dharani portal promises to be a one-stop solution for matters related to land properties and aims to bring in transparency, zero corruption, and promises simultaneous registration and mutation of non-agriculture assets.

The portal is a part of the new Revenue Act, which came into force on September 22 after Governor Tamilisai Soundarajan gave her assent to four Revenue Bills that were passed in the Assembly. The state government has already started training tahsildars on conducting property registrations through the land web portal Dharani.

The state government has put on hold registration of properties on September 8. With KCR inaugurating the portal, registration of properties will resume. The TRS government has already started conducting a survey of residences under the GHMC limits and across the state. GHMC employees and other local bodies have been visiting households with forms that have details of Aadhar, caste and other crucial information to be uploaded on Dharani portal.

The Congress Party and other political parties have opposed the survey stating that it infringes upon the privacy of the citizens. The survey exercise could amount to a violation of Article 13 (without the backing of law) and Article 21 (infringement of personal liberty).

A petition filed by Karunakar of Rangareddy district and Narayana Rao of Hyderabad in the High Court opposing the government’s survey. The Telangana High Court had issued notices to the government and the Chief Land Revenue Commissioner (CCLA) asking them to clarify their stance on the petition against the new Dharani land portal and how the government seeks to upload information on the website about non-agricultural properties.

Meanwhile, speaking on the occasion, KCR said Muduchintalapalli has become part of the government’s historical land reforms. “Dharani portal is a trendsetter. The portal is part of our revolutionary reforms which will eliminate the problems faced by farmers and others over pattadar passbooks and title deeds for transactions related to agriculture land. Every inch of land in the state will be undertaken for a new land survey,” he said.