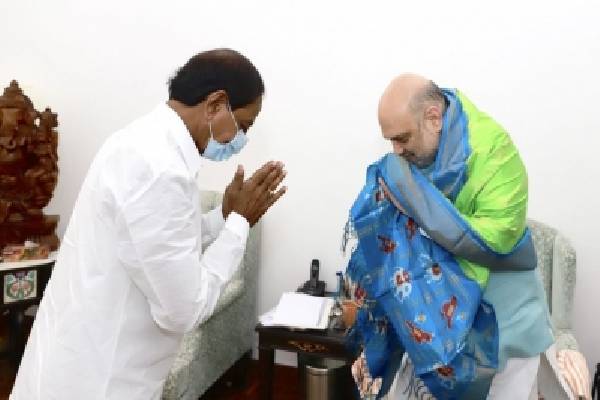 The Chief Minister, who called on Shah at the latter’s residence here, is on a five-day visit to the national capital.

In its request to the Central government, Telangana has sought to increase senior duty posts from 76 to 105. The earlier IPS cadre review for Telangana was done by the Ministry of Home Affairs in 2016 when a total of 76 senior duty posts and resultant 139 total authorised posts were approved for the state.

While this translates into a 40 per cent increase in cadre strength as opposed to the 5 per cent increase that is usually allowed, the state government is pitching for the increased numbers in view of the reorganisation of its districts, from 10 previously to 33 now.

“The allocation will help the posting of IPS officers as commissioners/superintendents of police/zonal DIGs/multi-zonal IGPs in various territorial units. At present, these territorial units have no sanctioned cadre posts,” KCR said in his representation submitted to the Prime Minister as well as the Home Minister.

“At present, these territorial units have no sanctioned cadre posts,” he stated.

During the course of the meeting that lasted around 45 minutes, the Chief Minister also briefed the Home Minister on the state’s requirements in the Naxal-affected areas of Telangana.