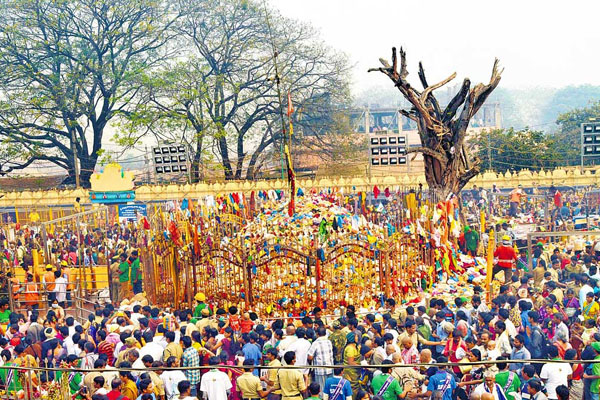 The devotees, including women, were standing in long queues to offer jaggery to tribal goddesses Sammakka and Sarakka, also called as Saralamma.

Sammakka and Sarakka were legendary warriors from the Koya tribe who died while fighting against the Kakatiya empire over 800 years ago.

The unique rituals will begin Wednesday night with the customary arrival of Sarakka’s image from Kannepally village which will be placed on a platform. The image idol covered in red cloth will be brought in a vessel laden with vermilion and turmeric powder.

The idols of Sarakkaa’s father Pagidigidda Raju and husband Govinda Raju will be brought to Medaram.

Devotees were having holy dip in Jampanna Vagu, a tributary of Godavari river. Jampanna was the tribal warrior and the son of tribal Goddess Sammakka who was killed in a war with Kakatiya Army. The tribals believe that a dip in the stream washes off their sins.

Authorities have made elaborate security arrangements for Medaram jatra, also called as Telangana’s kumbh mela. About 1.5 crore devotees are expected to participate in the event.

Chief Secretary Somesh Kumar and Director General of Police Mahender Reddy reached Medaram from Hyderabad to monitor the conduct of the fair.

Somesh Kumar directed all government departments to work with coordination to ensure smooth conduct of darshan and other rituals.

He reviewed the arrangements made by all the departments. He directed the irrigation department to maintain the water flow in the stream and asked it to keep swimmers ready to prevent any untoward incident.

Earlier, he flew over Jampanna Vaagu and other places where rituals were being conducted.

The police chief directed officials to be on alert to prevent stampede. He said 12,000 policemen were deployed for the peaceful and smooth conduct of the event.

The state government has sanctioned Rs 75 crore to take up various works for the smooth conduct of the rituals during the jatra.

Various departments have undertaken various works to provide all the necessary facilities for the devotees. These include sprucing up bathing ghats along Jampanna Vagu. As many as 132 dress changing compartments were constructed across 3.5 km stretch.

State-owned Telangana State Road Transport Corporation (TSRTC) is plying 4,000 buses to ferry devotees to Medaram from various places in the state. This is in addition to thousands of private vehicles.

The South Central Railway is also operating 20 special trains from Hyderabad and other places in Telangana to clear the extra rush of passengers. 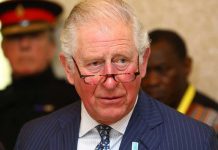