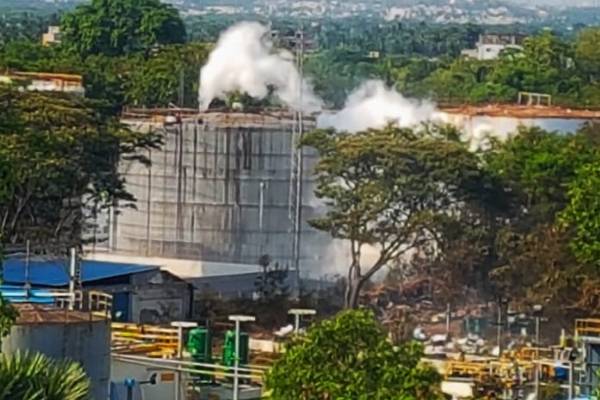 Nearly two months after the Vizag gas leak that had left 13 people dead and hundreds hospitalised, the Vizag police on Tuesday night has arrested 11 employees, including CEO and two directors of the South Korean company LG Polymers.

The arrest comes a day after the high-power committee, which submitted a 350-page report on Monday to Chief Minister Jagan Mohan Reddy, nailed the LG Polymers for human negligence and security lapses that led to the gas leak killing 13 people and hundreds hospitalised.

The committee headed by Forest Department Special Secretary Neerab Kumar, which had looked into various aspects that led to the gas leak, found fault with the management of LG Polymers for lack of proper safety response preparedness at the plant. The committee found that the gas leak occurred as the plant’s cooling system failed.

The report cited the lack of experience of LG Polymers India staff in monitoring and maintaining full tanks of styrene. “Our observations revealed that the management did not take proper care of the gas storage tank. There was a total breakdown on the part of the LG Polymers staff in handling the situation. There was insufficient knowledge of staff on styrene gas. There were poor safety protocols and poor safety management. The design of the styrene storage tanks was faulty, temperature monitoring and refrigeration systems had failed. There was no preparedness of the staff and officials to deal with the situation,” he pointed out.

The gas leak occurred on May 7 in the early hours from the plant operated by L G Polymers at Venkatapuram village outside Visakhaptanam. Horrific scenes of people gasping for breath and falling like leaves in the street unfolded. More than 350 hospitalized, according to official figures, of these more than 50 were children, many of whom are minors. Some fell off their bikes, some morning walkers collapsed inhaling the toxic fumes, children and women were found unconscious on the pavements. The KGH hospital in Vizag had to grapple with a swarm of patients cramming hospital emergency rooms with more than two gas victims being treated in one bed. There were children everywhere, often two to three to a bed. Some were brothers and sisters.

Chief Minister Y S Jagan Mohan Reddy, who had set up a high-level committee to probe the incident, announced Rs 1 crore compensation to the kin of the deceased. On June 1, the NGT had ordered the South Korean company to deposit Rs 50 crore. The Supreme Court had put on hold, for 10 days, the disbursal of Rs 50 crore compensation by LG Polymers for the Vizag gas leak incident, as directed by the National Green Tribunal.