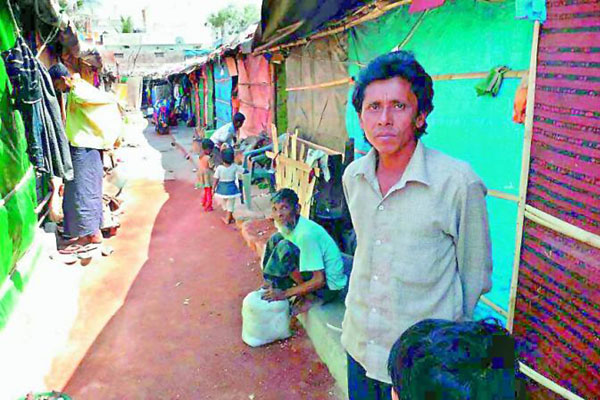 Though no Covid-19 positive case has been reported so far among the refugees, the fact that many families are living in wretched conditions puts them at risk.

About 6,000 refugees in the city are facing the worst crisis since they arrived here eight years ago, due to the coronavirus-fuelled lockdown.

Like other poor and economically weaker sections of the society, the lockdown has hit them hard.

However, what makes the condition of the refugees more pathetic is the fact that many families at the camps are staying in 10×10 feet plastic shacks side by side.

The refugees, who earn their livelihood by working as rag pickers, construction labourers or by selling vegetables and other items, have remained confined to their homes.

With no money to satiate their hunger, the refugees are totally relying on the non-governmental organizations and charity groups.

The fear is visible in Balapur and other camps in the old city of Hyderabad. The refugees said they heard about the pandemic from television news or the audio and video content some of them receive on their mobile phones.

Like other slum dwellers, social distancing is impracticable for them. “What will be the social distancing for families living in 10×10 or 10×15 ( square feet) huts,” asked Mazhar Hussain, director of the Confederation of Voluntary Associations (COVA), an NGO distributing ration among the 1400 refugee families.

“Not just refugees any poor family of four to six people has to spend their entire life in a small room. Even middle class families can’t observe social distancing,” he said.

He believes that the refugees are not vulnerable to coronavirus as neither do they travel abroad nor those returned from abroad visit them.

They also don’t mingle with locals but another activist said some refugees work for Tablighi Jamaat, whose congregation at Delhi last month proved to be a major source of Covid-19 spread in the country.

However, as the refugees avoid travel even within the country, none of them is believed to have attended the Delhi meet.

Meanwhile, various NGOs are working to save the refugees from starvation.

Save the Children, that works for the welfare of the refugees, is distributing food rations and hygiene kits with the support of the United Nations High Commissioner for Refugees (UNHCR).

COVA supported by others is distributing ration kits each costing Rs 3000. The kit has essentials which can last for one-and-a-half months. It is also providing cash assistance of Rs 500 to the old and weak.

Syed Moiz Qadri, who is also distributing food among the refugees, said many charity organizations were focusing only on two-three camps located close to the main road in Balapur. “All are distributing the aid here. There is a need to reach out to inmates of other camps in the interior areas,” he said.

The refugees hailing from Rakhine State came here in 2012 after fleeing Myanmar.

More than a million Rohingya are reported to have fled Myanmar to escape persecution by the armed forces. The majority of them have taken refuge in Bangladesh.

More than 30,000 are reported to have taken refuge in India. Most of them are in Jammu, Delhi and other parts of north India.