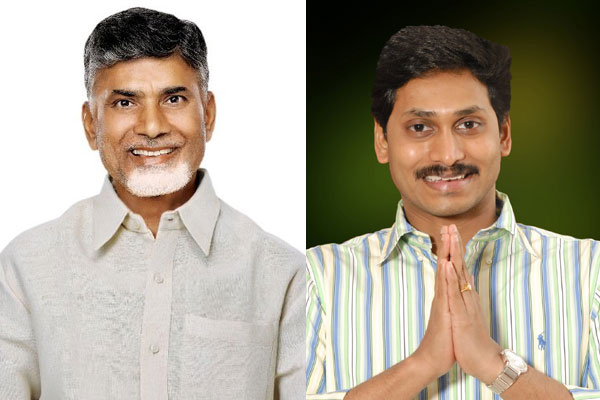 Battle lines are clearly drawn in Andhra Pradesh. State is all set to see a photo finish with contending sides evenly placed in a belligerent electoral battle, any small trigger can tilt the mandate this or that side. With Jana Sena failing to emerge as a formidable third player, the political polarisation in Andhra Pradesh is essentially between two parties, two leaders and to an extent even two castes. The electoral fights has turned into a sort of referendum for the people to chose between incumbent chief minister N Chandrababu Naidu and ever ambitious opposition leader YS Jaganmohan Reddy.

While Chandrababu Naidu is on a hectic mission to rally all the anti-BJP forces across the nation by even embracing his arch rival Congress, Jagan Mohan Reddy’s YSRCP chooses to remain equidistant from the two national parties despite facing allegations of arriving at a tacit deal with the BJP.

Naidu believes that placing TDP in an appropriate national political contest helped it in 2014 and will do so in 2019 too. On the contrary, Jagan expects to benefit from a strategy of regional confinement.

Writing in the Economic and Political Weekly (July 12, 2014), this author explains how the national factor helped Naidu in the last general elections: “The sense of helplessness strongly instilled in the Seemandhra electorate in turn also generated a feeling that the residual state of Andhra Pradesh desperately needed help from the central government. Jagan Mohan Reddy failed to acknowledge this new sentiment among the people. In fact, Jagan Mohan Reddy was also one among the leaders who were responsible for creating such a sense of helplessness.

Chandrababu Naidu demonstrated consummate political skills by arriving at an early understanding with the Narendra Modi-led National Democratic Alliance (NDA) and converted the threat into an opportunity. The strong Modi sentiment evident across the country convinced the average voter in the Seemandhra region that Chandrababu Naidu could form part of a winning combination at the Centre and could deliver for the truncated state without a capital…

While Chandrababu Naidu could successfully locate himself in a national political context that was considered so crucial for Seemandhra in the wake of bifurcation, Jagan Mohan Reddy demonstrated an utter lack of strategy. He even sent signals of extending support to the much discredited United Progressive Alliance which proved to be costly to his electoral prospects. Jagan Mohan Reddy’s stand of supporting any possible formation at the Centre for the benefit of the state failed to convince the electorate. This is because of the discernible political trend in favour of the NDA.”

Now in 2019, there is a simmering discontent against the Modi regime for the manner in which Andhra Pradesh has been treated, especially the denial of Special Category Status (SCS) to the state. Thus, Chandrababu was cautious enough to realise that continuing his alliance with the BJP would prove to be costly for the TDP given the antipathy towards the NDA-led central government.

The opposition YSR Congress, has also been fighting for SCS. But, the YSR Congress failed to counter a perception that it is closer to BJP and would not hesitate to join NDA if post poll arithmetic demands so. The TDP has cleverly nurtured such a perception among the electorate, thanks to Jaganmohan Reddy’s relative silence on many issues on which the BJP needs to be confronted. His unconditional support to BJP nominees in the presidential and vice presidential elections helped only to strengthen such perception. At a time when people of Andhra Pradesh are so strongly disenchanted with Narendra Modi regime, this strategic deficit of YSR Congress would prove to be a liability for the party.

Pawan Kalyan has already deserted Naidu. The TDP won with a slender, mere 2% margin in 2014. The loss of BJP and Pawan Kalyan would certainly hurt the TDP in terms of electoral arithmetic. The party expects to make up for this loss by allying with the Congress. But given the anti-Congress narrative over the bifurcation promoted by the TDP itself, Naidu found it difficult to sell his idea of joining hands with the villain of bifurcation. Thus, he is now cleverly couching his new-found love for the Congress in the perspective of national politics. The BJP has already denied special status and the Congress promises to deliver it. Thus, Naidu finally bid goodbye to the BJP to embrace the Congress, yet again appropriately locating himself in a national context. However, to avoid any possible anger from the voters, the TDP chose not to ally with Congress at the state level given the pathetic experience of the grand alliance in Telangana polls.

Instead, Jagan said that his party would support any government at the Centre if it delivers special status to the state. Such a stand is insipid given the fact that the BJP has already denied SCS and the Congress not only authored it but now promises to offer such a status to Andhra Pradesh. Thus, the politics of equidistant at the national level may not yield any additional dividend for the YSRCP.

( Prof.K. Nageshwar is India’s noted political analyst. He is a former member of the Telangana Legislative Council and professor in the Department of Communication & Journalism, Osmania University, Hyderabad, India