Falling in love is a painful joy is the tagline of Shiva Kandukuri’s new film Manu Charitra.

The film’s first look poster is unveiled today on the occasion of hero Shiva Kandukuri and the poster shows bloodied Shiva riding bike with a cigarette in his mouth.

The poster looks intriguing and gives an impression that it’s going to be an intense love drama.

Set in the backdrop of Warangal, Bharath Pedagani is directing the film.

N Sreenivasa Reddy and Ronnson Joseph together are bankrolling the project, while Kajal Agarwal is presenting it.

Megha Akash and Priya Vadlamani are the heroines in the film. 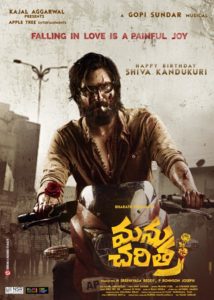