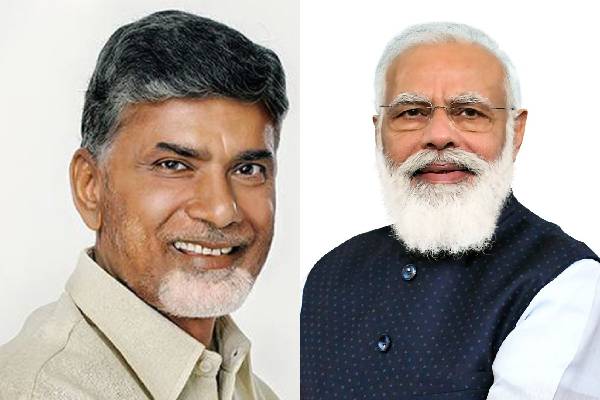 Chandrababu Naidu was invited by the Union government to attend the meeting which was chaired by Prime Minister Narendra Modi. It was for the first time in the last five years that the two leaders spoke to each other.

After the meeting, Prime Minister Narendra Modi walked down to Chandrababu Naidu and took him aside. They spoke for about five minutes in a pleasant situation.

The TDP broke alliance with the BJP in 2018 on the special category status demand. After breaking the alliance, Chandrababu Naidu joined hands with the Congress leaders to defeat the BJP in the 2019 elections. He toured in several states campaigning against the BJP.

However, the 2019 results showed different prospects for the BJP and the TDP. The TDP lost power in Andhra Pradesh, while the BJP retained power with greater majority. Since then, Chandrababu Naidu never took the opportunity to speak to the BJP leaders.

Back in Andhra Pradesh, there is a strong demand from the TDP ranks for alliance with the BJP and Jana Sena for the 2024 elections. While Jana Sena is ready for the alliance, the BJP had been saying that doors were closed for the TDP.

In politics, there will be no permanent friends and enemies. Likewise, the invitation to Chandrababu Naidu for the meeting and Modi interacting with Naidu have given scope for the TDP ranks to heave a sigh of relief. They are confident that Chandrababu Naidu would break the silence and restore alliance with the BJP in the next elections.

It is to be seen what is in store and whether the BJP would accept the alliance with the TDP or not.