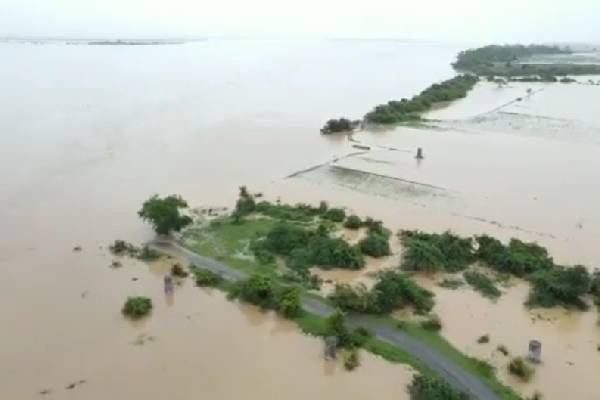 Parts of Telangana continued to reel under monsoon fury with the Godavari river flowing dangerously and several villages remaining marooned and cut-off from the main land.

After lashing several districts of the state for the last one week, rains abated on Thursday but both Godavari and Krishna rivers and their tributaries remained in spate due to huge inflows from upstream.

Bhadradri temple and Annadanam area was submerged due to rise in Godavari level. Some colonies in the towns were inundated and the authorities shifted the residents to relief camps.

For a third day, road links from Bhadrachalam to Charla, Dummugudem mandals and other low-lying areas remained snapped.

Officials said they have identified 56 villages which were inundated and evacuated 6,700 people to 43 relief camps.

Transport minister P. Ajay Kumar along with top officials reviewed the situation at Bhadrachalam. He said the inflows are likely to reach the peak by Thursday night. The minister said the administration is ready to tackle the situation even if the water level rises to 70-72 feet.

The minister said people need to be alert for the next two days. He appealed to them not to venture out of their homes.

Manthani town in Peddapalli district was also hit by floods. Several colonies were inundated due to overflowing Bokkala Vagu. The district administration launched rescue and relief operations. People from inundated colonies were being evacuated to relief camps.

The town has been without electricity for the last 12 hours. Road traffic from Manthani to Peddpally and Karimnagar came to a complete halt as flood water was flowing over the highways.

According to the Central Water Commission, Godavari continues to flow in extreme flood situation at Mancherial. The water level on Thursday morning was 138.86 meters, above the danger mark of 135 meters.

At Kaleshwaram in Bhupalapally district, Godavari continued to flow in extreme flood situation at a water level of 107.56 meters, about the highest flood level. Paranahita river was also in spate at Kaleshwaram.

Authorities have sounded a red alert at Mahadevpur, Kaleshwaram and other areas along the course of Godavari. Pushkar ghats were already submerged and water had entered houses at Kaleshwaram.

The district administration was evacuating people from low-lying and submerged villages.

Khanapur area on the outskirts of Nizamabad town was inundated. A man was washed away in floods with his bicycle. Road link from Nizamabad to neighbouring Maharashtra was snapped.

Meanwhile, officials in Nirmal district heaved a sigh of relief with inflows receding at Kadam project. Massive inflows on Wednesday had raised fears for the safety of the dam. The inflows on Thursday came down to 2 lakh cusecs from 5 lakh cusecs the previous day.

Forest minister Indrakaran Reddy said the project was now in safe zone. The flood water is being released through 17 gates.