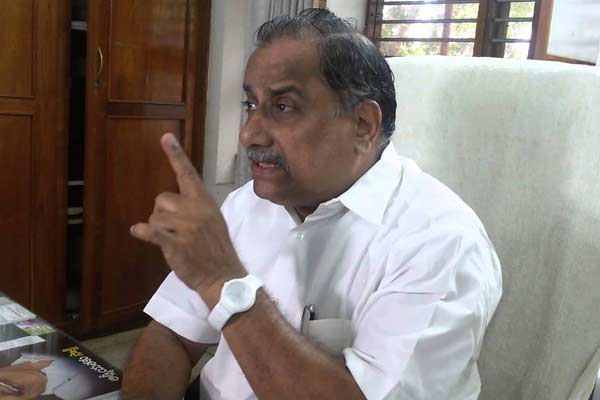 Kapu reservation movement leader Mudragada padmanabham, this time round, his ire towards Jasti Venkataramudu, Director General of Police, Andhra Pradesh for allegedly foisting false cases against the members of his “Kapu Jati” which is living in what he said crushing poverty and hunger.

The man of “letters”, urged the DGP not to book cases on members of Kapu community, who attended the Kapu Garajana on January 30, at Tuni.

Writing a sarcastic letter to DGP JV Ramudu, Mudragada said he came to know that cases were being booked for violating the sections 144 and 30. Three day’s back he wrote a letter to chief minister Naidu, reminding the things he has to for Kapus. Today’ letter was his fourth one in the past couple of months.

In some instances,the wrote in the letter, police were opening rowdy sheets against innocent Kapu leaders, just because they happened to be present at the meeting, which was part of the movement for Justice.

The call to Kapu Garjana, people’s cry of Hunger, he said in the two page letter sent to the DGP on Thursday under register post.

Asking the DGP to instruct the police not to harass the innocent Kapus, Mudragada said, he would give the addresses with phone numbers of all those stranded on the roads due to the closure of the roads, those who could not reach the venue, those who were present at the venue, those who participated in the candle vigil and those who sounded the lunch plates in solidarity to this fast. He also said he would cooperate with the police and give the vehicle numbers used by Kapu leaders as well as transport operators who carried Kapus to Tuni to facilitate the work of the cops across the state.

” You can book cases against them as you like. They can be sent to prison for life. No Kapu leader would apply for bail. If you want, you can take them to jail with handcuffs,” he said and asked the DGP to give him 10-day time to finish this work.

Stating that Kapu Garjana was the call of hunger of his Kapu jati and had not targeted any single community or communities, the Kapu leader urged the DGP to desist from foisting false cases.
Mudragada asked the DGP to identify a venue and he would bring all the members Kapu community in lakhs.