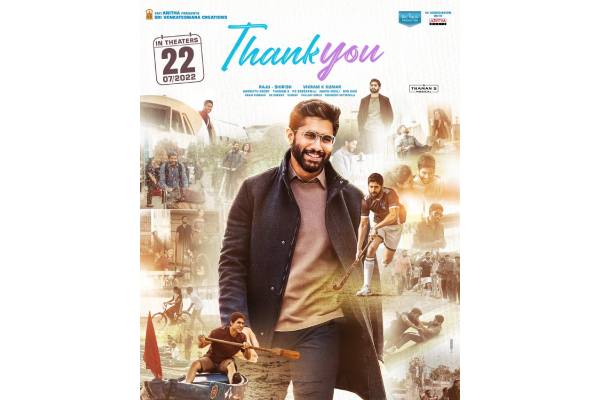 It is all known that Tollywood’s ace actor Naga Chaitanya is all set to entertain us with his love story ‘Thank You’. Few days ago makers unveiled the intriguing teaser which enthralled the audience. Now the makers are busy with promotions. As part of promotions makers already two back to back chartbuster from the album composed by Sensational music composer SS Thaman.

Naga Chaitanya Akkineni will be seen as a hockey player in his much-hyped upcoming movie Thank You. The Manam, actor who wrapped up the shooting for the movie earlier, will be seen in a role for which he had undergone a body transformation as well.

Amid the high expectations the makers planned to release the movie on July 8. Due to unforeseen circumstances today makers announced that movie will be released on July 22. With all the commercial elements Thank You movie is all set to entertain audience on July 22.

The film is directed by Vikram K Kumar and produced by Dil Raju and Sirish under the banner of Sri Venkateswara Creations. Raashii Khanna, Malabvika Nair and Avika Gor are the female leads. S Thaman has composed the music for the film. BVS Ravi written the story.