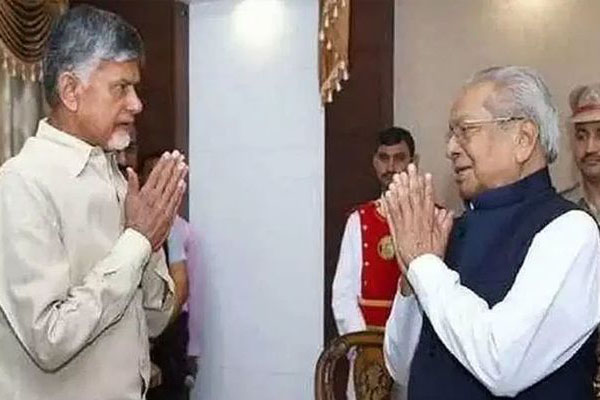 In the letter, the TDP president charged that the YSRCP government was pursuing politics of vengeance, leading to gross violations of human rights where independent voices were being muzzled. The former chief minister also pointed out that false cases were being filed to harass and persecute the Opposition TDP leaders.

The TDP also complained to the Governor against the undemocratic and inhuman arrests of their party leaders Atchannaidu, Prabhakar Reddy and his son Asmith Reddy. Terming the recent arrests of TDP leaders as politically motivated, Naidu in the letter, stated that leaders who do not succumb to the YSRCP’s arm-twisting tactics are being harassed with false cases and arrests.

Naidu informed the Governor that the YSRCP government was pursuing a faction rule and its political vengeance was leading to gross violations of human rights.

In the letter, Naidu also brought to the notice of the Governor that the YSRCP ruling had been undermining the power and the position of constitutional bodies. He noted that the courts and the Election Commission are pillars of the country’s democracy which are under a threat of subversion.

Under Jagan’s rule, an unprecedented and dire situation has arisen, as key institutions have squirmed under the overbearing pressure of interference. The TDP president also apprised the Governor about the omissions and commissions of the YSRCP government and alleged that the government had indulged in corrupt practices in sand, land and liquor, coronavirus kits and bleaching powder.

In the letter, Naidu also brought to the notice of the Governor that the YSRCP leaders made derogatory comments against the AP Legislative Council chairman Shareef and deputy chairman Reddy Subramanyam during important debates on crucial bills, including the capital development and decentralization bill and CRDA repeal bill on Wednesday. The House was adjourned sine die after pandemonium broke out with the YSRCP leaders virtually coming to blows with the TDP leaders.