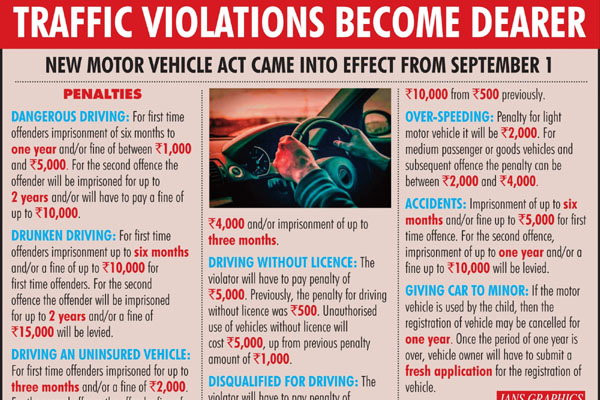 Unveiling of the new Motor Vehicle Act, which prescribes steep hike in the fine for traffic violations, has triggered a big controversy and an increasing number of states have decided not to implement it, arguing that it puts disproportionate burden on the people.

The Motor Vehicles (Amendment) Act, 2019 was passed by Parliament during the last session and it came into effect on September 1.

The penalties are so high that a truck driver and its owner earlier this week had to shell out a whopping amount of Rs 2 lakh in Delhi for overloading and some other violations.

Union Transport Minister Nitin Gadkari strongly justifies the steep hike in penalties, saying it is aimed at deterring motorists from violating the traffic rules as a huge number of people die in road accidents every year in the country.

However, a number of states like Gujarat, West Bengal and Uttarakhand have decided not to implement the new law while Maharashtra has requested the Centre to reconsider the charges. They feel the penalties are too high and would put a lot of burden on the people.

According to the new law, in case of dangerous driving, first-time offenders face imprisonment of six months to one year and/or fine of between Rs 1,000 and Rs 5,000. For the second offence, the offender will be imprisoned for up to two years and/or will have to pay a fine of up to Rs 10,000.

For drunken driving, a violator will have to face imprisonment up to six months and/or a fine of up to Rs 10,000 in case of first time offense. For the second offense, there will be a prison term of up to 2 years and/or a fine of Rs 15,000 will be levied.

Penalty in case of driving despite being disqualified will cost Rs 10,000, up from Rs 500 previously.

One can face a fine of Rs 500 if caught first time for racing and speeding vehicle and/or imprisonment for up to one month. In case of the offence for second time, the penalty goes up to Rs 10,000, though imprisonment period remains the same.

Travelling without a ticket in state transport buses will cost Rs 500, up from Rs 200 as prevalent earlier.

A penalty of Rs 2,000 can also be levied on a violator in case of disobedience of government orders and refusal to share the information requested with the authorities. Prior to this, the amount of penalty in such case was Rs 500.

Unauthorised use of vehicles without licence will cost Rs 5,000, up from previous penalty amount of Rs 1,000.

Penalty in case of driving when mentally or physically unfit to drive has been increased to Rs 1,000 from Rs 200 for first-time offence. For second and subsequent times, the penal amount has been increased from up to Rs 500 to Rs 2,000.

New penalties have been prescribed for carrying of excess passengers, failure to use safety belt and violation of rules in seating of children, violation of safety measures for motor cycle drivers and pillion riders, refusal to stop and submit vehicle for weighing, use of phones in silent zones and failure to allow free passage to emergency vehicles.

Causing obstruction in free flow of traffic can lead to penalty of Rs 500, up from Rs 50 earlier.

As per the new law, an individual can apply for renewal of driving licence any time between one year before its expiry and up to one after its expiry.

However, if one applies for renewal after one year of expiry of licence, then he/she will be required to undertake the driving licence test once again.

If you wish to change the residential address or place of business in your driving licence, then the same can be done online and you can apply for this to any registering authority within the state.

Giving car to minor a child for driving has become an expensive affair with the new law.

As per newly-inserted section, 199A and 199B of the Act, a violator will be fined a sum of Rs 25,000 and face imprisonment of up to three years. As for the minor child, he will not be able to get his learner’s licence till the age of 25. As per the Act, there will be an annual increase of these fines by up to 10 per cent.