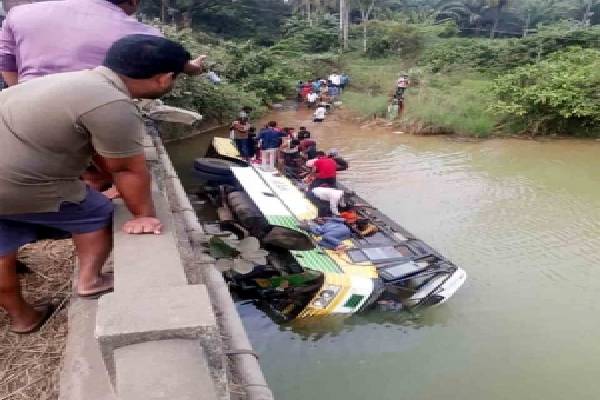 Nine people were killed and 12 others injured when a bus fell into a stream in Andhra Pradesh’s West Godavari district.

The accident occurred in Jalleru in Jangareddygudem mandal, about 55 km from district headquarters Eluru.

According to police, the bus of Andhra Pradesh State Road Transport Corporation (APSRTC) hit a bridge railing and fell into the rivulet when the driver was trying to avoid hitting a lorry coming from the opposite direction.

The deceased included the bus driver and five women. While eight people died on the spot, an injured person succumbed at a hospital at Jangareddygudem.

The bus with 47 passengers onboard from Velurupadu was on its way to Jangareddygudem. About a dozen passengers were injured and shifted to hospital.

Immediately after the accident, local people launched the rescue operation. Some passengers managed to come out of the bus through windows and they were brought to safety by rescue workers by deploying boats.

Senior police and revenue officials rushed to the spot and supervised the rescue work.

Transport Minister Perni Nani ordered a probe into the accident. He asked senior officials to conduct a thorough investigation and
submit a report.