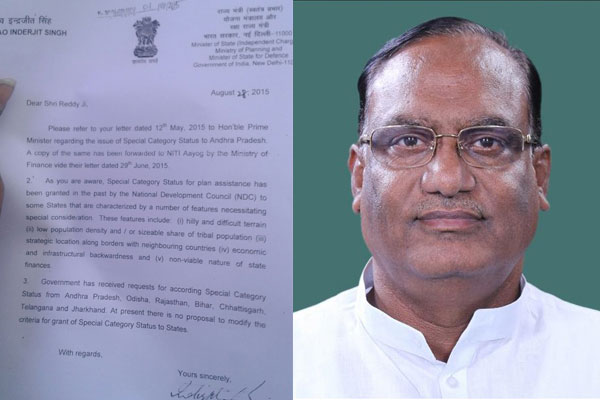 Centre has no plans to modify the criteria evolved to accord special category status to a state. Rao Inderjit Singh who created commotion by stating this in Lok Sabha during last session, has put it on paper now.

In a letter written to Nalgonda MP Gutha Sukhender Reddy, Rao Inderjit Singh, minister of state for planning, reiterated centre’ stand. “Special category status for plan assistance has been granted in the past by the National Development Council (NDC) to some states that are characterized by a number of features necessitating special consideration. These features include” 1. hilly and difficult terrain 2. low population density or sizeable share of tribal population 3. strategic location along the borders with neighbouring counties 4. economic and infrastructural backwardness and 5. non-viable nature of state finances,” he minister said.