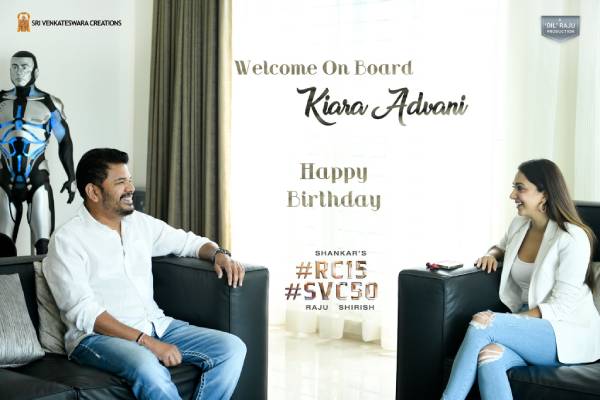 Bollywood beauty Kiara Advani is celebrating her birthday today and the makers of Ram Charan’s next announced that the actress is now on the board for his next that will be directed by Shankar. The film is an action thriller and the shoot commences in September. A picture of Shankar in conversation with Kiara Advani is released today on the occasion. Ram Charan who is busy with RRR will complete the shoot by August and he will transform himself for the role. A look test is conducted recently and Shankar, Charan finalized the looks for the project in Hyderabad.

Kiara Advani happens to be one of the busiest Bollywood beauties. She has no time for Tollywood and she rejected a bunch of Telugu projects. Impressed with the script, Kiara signed Ram Charan’s movie. The shoot commences with a song in a special set that is constructed in Ramoji Film City. Shankar is keen to complete the shoot of this big-budget movie in quick schedules. Thaman is on board as the music director and Dil Raju will produce this prestigious project which happens to be the 50th film for the veteran producer.

Joining us on this super exciting journey is the talented and gorgeous @advani_kiara !