Reigning actress Samantha Akkineni and lady director Nandini Reddy are bringing a Korean remake to Telugu audience with the title Oh Baby. The first teaser of the film is out this Saturday and it is Samantha’s show all the way as she shines quite well with her comedy timing and dialogues.

The one minute teaser gives a brief glimpse of Samantha’s character in this lady oriented film. While Samantha will be seen in the younger girl’s role, yesteryear popular actor Lakshmi is playing the role of old woman. It appears that the story is narrated from past to present day through Samantha and will have a lot of humour attached to her dialogues. Naga Shaurya is playing a prominent role in the film and he has a couple of glimpses in the teaser.

The production values by Suresh Productions banner are rich. Of late Tollywood audience are embracing off beat films. So, it remains to be seen if Oh Baby also garners similar reception at the box office. 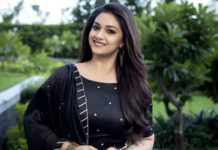