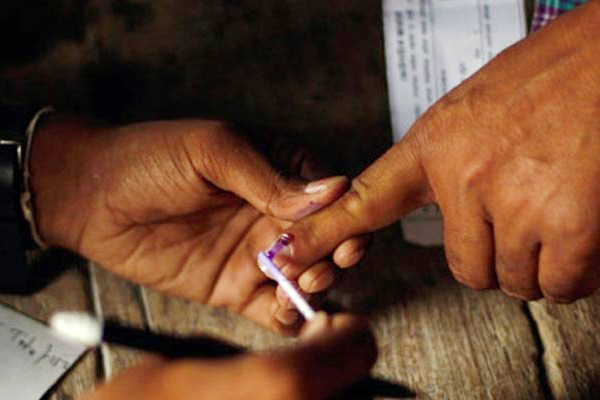 More than 80 per cent turnout was recorded in the by-election to Huzurnagar Assembly constituency in Telangana on Monday, poll officials said.

The polling ended peacefully at 5 p.m. but those standing in queues at the polling stations were being allowed to cast their votes.

A huge turnout of 82.23 per cent was recorded till 5 p.m. Officials at the office State Chief Electoral Officer said the final polling percentage will be known later.

A turnout of 85.96 per cent was recorded in the constituency in the Assembly elections held in December 2018.

Enthusiasm among voters marked the polling, which began at 7 a.m. at all 302 polling stations in the constituency in Suryapet district. Long queues of men and women voters were seen at majority of the booths.

A total of 2,36,842 voters were eligible to exercise their franchise in the by-election, the first since the Telangana Rashtra Samithi (TRS) retained power in the state in December 2018.

The by-poll was necessitated by the resignation of Uttam Kumar Reddy from Assembly following his election to Lok Sabha from Nalgonda.

The TRS has never won the seat since it was created in 2009 during the delimitation of constituencies. Uttam Kumar Reddy of Congress won all three elections (2009, 2014 and 2018).

The Bharatiya Janata Party (BJP), which has fielded Kota Rama Rao, is looking to increase its vote share while the Telugu Desam Party (TDP), which is battling to maintain a toehold in Telangana politics, has fielded Chava Kiranmayi.

Saidi Reddy, who had lost to Uttam Kumar Reddy 7,466 votes in 2018, cast his vote at Gundlapalli village.

Police confined Uttam Kumar Reddy to his house in Huzurnagar, following a complaint by to the election authorities by the TRS. The ruling party said since the state Congress chief is a non-local, he should leave the constituency. Uttam Kumar Reddy, however, argued that he is a local as he has his house in the town.

Tension prevailed at Uttam Kumar Reddy’s house Sunday night when officials reached there. However, District Collector and returning officer Amoy Kumar later clarified that the Congress leader can remain in the constituency as Huzurnagar is one of the Assembly segments in his Nalgonda constituency but he will not be allowed to come out of his house.

Authorities had made elaborate arrangements for the peaceful and smooth conduct of the by-poll. The Election Commission deployed nearly 1,500 security personnel and deployed 965 Electronic Voting Machines (EVMs).