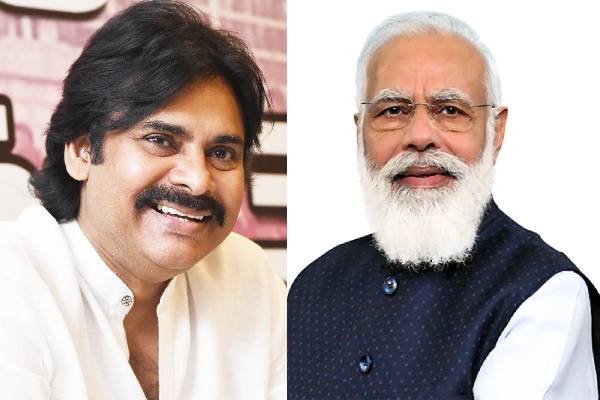 Is BJP making grand plans for Andhra Pradesh? Is it trying to revive the party and try to entire its angry voters who are upset with its back-tracking on issues like Polavaram and Special Status? Is it readying a powerful weapon to achieve this?

BJP sources say that the party is trying bring in Pawan Kalyan into the Modi cabinet and give him a key ministry. Though he would be made a union minister of state like his brother Megastar Chiranjeevi, he would be projected in AP for 2024. If sources are to be believed, a union minister who knows AP politics inside out, is said to be talking to Pawan Kalyan.

According to sources, there are two reasons why the Modi and Amit Shah want Pawan Kalyan into the cabinet. Pawan is a charismatic vote catcher and managed to get significant chunk of votes in the 2019 elections. Though he has lost the election from both the seats he has contested, his party still managed to get significant number of votes. Also, Pawan represents a powerful caste in AP politics and has the ability to rally around those voters.

Secondly, AP has no representation in the Union Cabinet. Telangana has one union minister of state. AP is perhaps one of the very few states that is not represented at the Centre. Though it has GVLNarasimha Rao as the Rajya Sabha MP and he can be made a minister, the party feels that it would not be benefited in any way by making him a minister. It feels Pawan will help the party in ways more than one.

The minister, who is talking to Pawan Kalyan is said to have suggested that Pawan Kalyan should merge his party into the BJP and be its face for 2024. As of now, there is no response from Jana Sena chief, sources said.