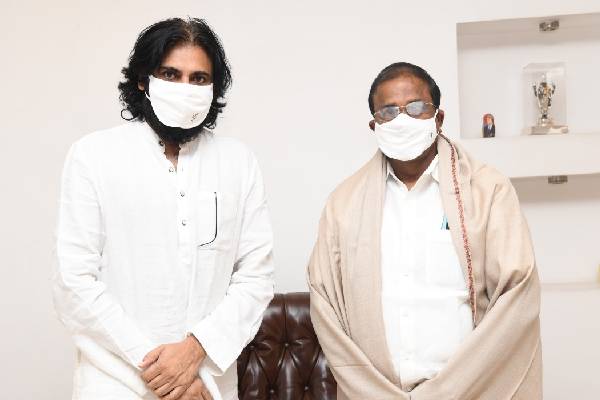 Jana Senani Pawan Kalyan has held a meeting with BJP AP President Somu Veerraju amid the speculation on their decisions regarding the Tirupati parliament segment bypoll. They have not yet finalised their joint candidate. Just like before, both the leaders could not come to a conclusion on which party candidate should contest the election.

After the meeting, Pawan clarified that he had discussed with Veerraju about the issues concerning the bypoll. A final decision on the candidate was not taken yet. The issue was kept pending for further debate between the two parties.
Senani however said that both the parties were discussing in depth the strategies to be adopted in order to pull out a victory in the byelection. On his part, Veerraju kept silent on the issue of the candidate selection for now. He used to indicate in many words that the BJP would nominate its candidate in the past but not any more.

It is understandable that both Pawan and Veerraju were eager to put out a strong outward appearance that they were very serious about contesting and winning Tirupati seat. Even several weeks after the TDP and the YCP announced their nominees, both the BJP and the Jana Sena are not able to come to an agreement on their candidate selection.

The Jana Sena cadres in Tirupati are indeed upset that the BJP is still expecting to put up its candidate despite lack of enough base in the constituency. It is highly unlikely for both the parties to make an early decision till after the poll notification is issued.