Prime Minister Narendra Modi will on Sunday chair the fourth meeting of the Governing Council of NITI Aayog at Rashtrapati Bhavan here, an official statement said on Friday.

During the meeting, the Council will discuss important subjects including measures taken to double farmers’ income, progress of flagship schemes like Ayushman Bharat, National Nutrition Mission and Mission Indradhanush.

It will also discuss measures taken for development of aspirational districts and the celebration of 150th birth anniversary of Mahatma Gandhi, an official statement said.

The day-long meeting will be attended by Union Ministers, Chief Ministers, Lt Governors of union territories and senior government officials.

The Governing Council of NITI Aayog is the premier body tasked with evolving a shared vision of national development priorities, sectors and strategies with the active involvement of states in shaping the development narrative.

The Council reviews the work done during the previous year and deliberates upon the future developmental priorities. 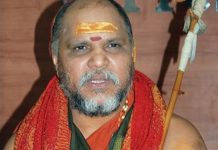