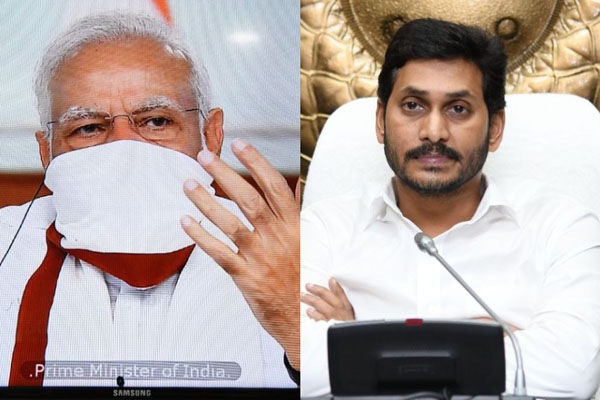 On Wednesday, when Modi held a video-conference to take stock of the Covid situation in the country, his attention caught the framed portrait of Lord Venkateswara Swamy when Jagan logged in to take part in the virtual meeting. Jagan took part in the video-conference at Annamayya Bhavan. Behind him was the portrait of Lord Venkateswara neatly encased in a frame and adorned on the wall.

On Wednesday, Jagan took part in the videoconference along with Health Minister Alla Nani and Home Minister Sucharita.

Despite protests, the Chief Minister entered the abode of Lord Venkateswara Swamy to present ‘Pattu Vastrams’ on the behalf of the state government. Jagan was seen wearing traditional silk ‘pancha’ and ‘dhoti’ with the namam (insignia) applied to his forehead. After presenting the ‘Pattu Vastrams’ to Lord Venkateswara Swamy, he headed to Vakulamata for ‘darshan’. Later, he will take part in ‘Garuda Seva’.

Opposition parties have demanded that the Chief Minister should respect the age-old practice of non-Hindus signing the declaration form before entering the Tirumala shrine.

As per the TTD general rules, the Rule No 136 clearly states that only Hindus are allowed for darshan. Non-Hindus who wish to have darshan of Lord Venkateswara Swamy have to disclose their faith and give a declaration form to the TTD. As per conventions, since the Chief Minister is a converted Christian, he is bound by the TTD regulations to sign the declaration form. However, the Chief Minister was in no mood to respect the age-old Hindu traditions and practices.