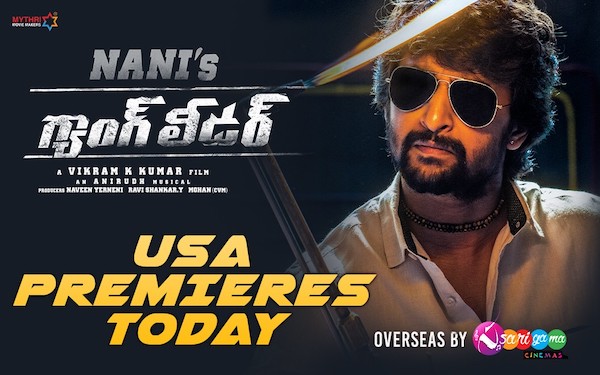 It is going to be a grand release for Nani’s Gang Leader in the US with over 200 screens set to showcase the film, marking the largest release in the territory for the actor.

Leading distributors of Telugu movies overseas, Sarigama Cinemas, are releasing the film to the audiences in the States!

Set to release on September 13 worldwide, the film will have grand premieres across the US today!

Nani is already a favourite with the audience in the US owing to his interesting choice of stories for his films. And this film takes that sentiment forward and Nani will be seen in a comic thriller for the first time in Gang Leader!

The buzz around the film is already quite intense ever since the trailer was released. It’s a film that can be watched with families and will the perfect treat for Indian cinema lovers and especially Telugu audiences this weekend.

Sarigama Cinemas is glad to be associated with the film and we can’t wait to show it to the people of the US.

Bookings are open now! Catch the film at the theatres nearest to you.