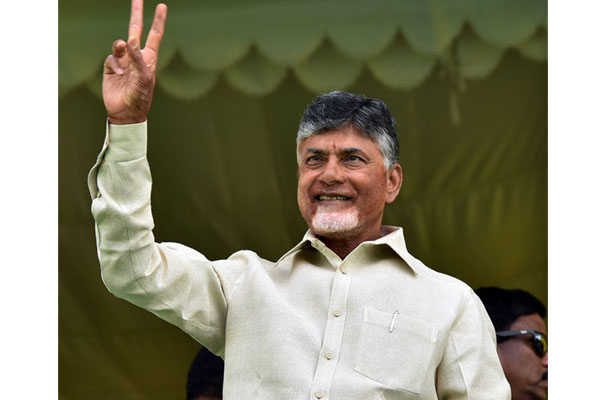 Amidst swelling ground reports that the YSR Congress may wrest power from TDP this time, the TDP leadership especially Chief Minister and party supremo Chandrababu Naidu is pretty confident on retaining power. Not just the ground reports coming to the media, several opinion polls held before the elections also pointed out towards a clear win for YS Jaganmohan Reddy though few of them predicted TDP win too. However, the publication of exit polls is delayed due to multiphase polling and would only be known on May 19, the last phase of polling. In fact, the visibly disturbed Chandrababu Naidu and his body language gave credence to the reports of TDP losing the polls
Many thought that Chandrababu Naidu’s claim that he would win as only public posturing. His unrelenting tirade over EVMs is also seen as an alibi to defend his failure to win the polls. The conspicuous silence of Lokesh further strengthens the feeling that TDP is nervous.

Notwithstanding all this, if one speaks to TDP insiders, they tell that their leader is really confident of winning the polls. The TDP sources argue that only vocal sections are talking about Jaganmohan Reddy winning the elections and based on this feedback, the YSR Congress chief looks very confident this time. The TDP leaders even draw the parallel to the Assembly elections in Telangana. The vocal sections making a lot of noises on the KCR government gave an impression of Congress led Praja Kutami coming to power. But, the TRS won the poll landslide.

The YSR Congress has its own calculations. They feel that the urge for change is quite visible among the electorate and the enthusiastic response from voters is interpreted as people’s urge to defeat the incumbent government. Give Jagan a chance feeling has attracted the voters, the YSR Congress party strongly claims. The TDP led combine won the 2014 polls with less than two per cent margin. The BJP and Pawan Kalyan deserted the TDP. Several sections of the electorate especially the Kapus got disgruntled with TDP due to non-fulfilment of promises like quotas. The sitting MLAs of the ruling party face strong anti-incumbency. The Janma Bhoomi committees spelt a political disaster for Chandrababu Naidu. The North coastal Andhra and the Rayalaseema people are alienated due to a capital centred model of development, while the people in the capital region are angry over the government for not doing anything on the ground despite lofty claims of world-class capital city. All these reasons are cited by those who believe that change of guard in Andhra Pradesh is imminent this time.

But, why is Chandrababu Naidu still confident of winning the elections. Firstly, as Naidu himself claimed the welfare schemes like Pasupu Kunkuma created an enormous positive vote for the ruling party. The silent revolution will bring back the TDP to power, claimed Naidu immediately after the elections. The TDP interprets the increase in voting as pro incumbency vote. The participation of women in large numbers and their long waits at the polling booths due to malfunctioning of EVMs indicate their resolve to bring back Chandrababu Naidu who gave such generous cash support to them. The TDP completely hopes on the women vote to win the polls this time.

Secondly, the TDP also feels that other welfare schemes like old age pensions have also helped them. The government has substantially increased the pension amounts. The old people showed a visible endorsement of Chandrababu Naidu government, the TDP sources explain.

Thirdly, the middle classes are swayed away by the long and spirited battle the TDP and the Chief Minister, in particular, fought for special status to Andhra Pradesh.

Fourth, the poorer sections especially dalits constitute a major chunk of YS Jagan’s support base. The TDP hopes to cut into this vote base of YSR Congress due to the positive impact of Chandrababu Naidu’s welfare schemes. Unlike the first term as the chief minister, Naidu has gone on a full swing to implement several populist schemes.

Fifth, Muslims and other minorities constitute a loyal vote base of YS Jagan. The TDP believes that there has been a substantial shift in this vote especially Muslim vote due to YSR Congress failure to fight the BJP and Chandrababu Naidu waging a spirited battle on Modi.

Finally, the TDP also feels that the Jana Sena failed to create much electoral impact despite initial fears. Any rise in Jana Sena voting would have meant significant damage for TDP as Pawan Kalyan’s supporters voted for TDP in 2014.

As the rival camps strongly believe that people have voted for them, only the EVM count would reveal the mind of the voters.