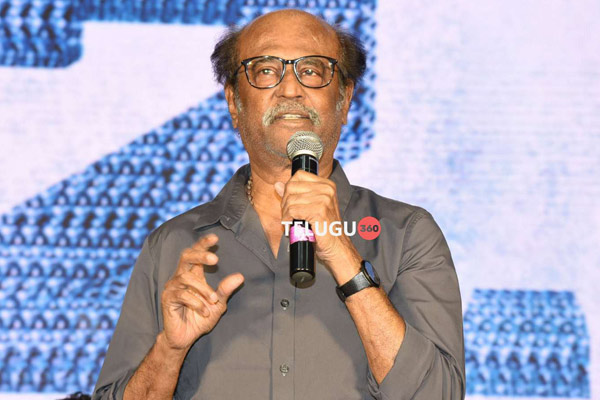 Superstar Rajinikanth’s 2Point0 is gearing up for a massive opening this Friday. The Shankar directional is billed as the costliest Indian film to date as the makers have spend a whopping budget for the visuals. Reportedly, the film is going to feature heavy duty VFX effects and the trailers have given a glimpse of what is in store for audience after the film’s release.

It is a known fact that the VFX and CG work of 2Point0 was done in renowned stuidos across the world. This is one of the reasons why the film was delayed several times. Shankar took his own time and got every ready before announcing the release date. So, there are high expectations on the visual content of the film. The whole team is banking heavily on the visuals effects as they are going to be the USP for the film.

Shockingly, Rajinikanth made sensational comments on the film’s visuals during the promotional event in Hyderabad. Rajini said Shankar worked very hard to make this a visual extravaganza, but was nervous and disappointed as the VFX effects didn’t make the cut as they have expected.

Rajinikanth’s shocking comments have now become a topic of discussion among everyone. A lot of money is on stake with 2Point0 and the visual effects are going to be the deciding factor for the film. Rajinikanth’s comments might come as a dampener for audience who are waiting with a bated breath to experience a visual grandeur on screen.