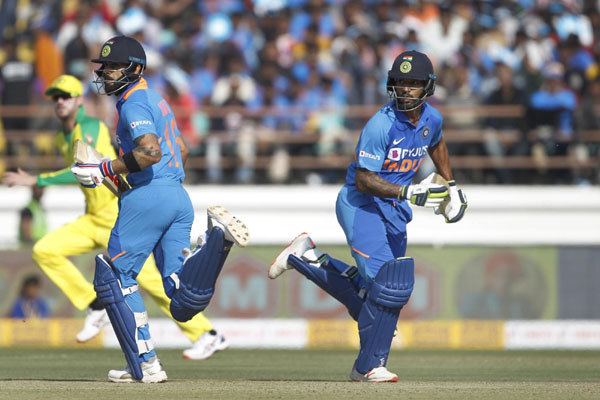 Shikhar Dhawan, Virat Kohli and K.L. Rahul cracked fluent half centuries as India threw down the gauntlet at Australia by posting a challenging 340/6 in 50 overs in the second one day international here on Friday. The Indians were penalised five runs for repeated running on the pitch and that will see Australia start the chase at 5/0. The incident took place in the 48th over with Rahul and Ravindra Jadeja at the crease.

Dhawan scored his third straight fifty with a sublime 96 from 90 balls, his innings laced with 13 fours and a six as skipper Kohli smashed a 76-ball 78 (6×4). But it was Rahul, batting at No.5 as the regular keeper in place of Rishabh Pant, who gave India the much-needed push in the last ten overs with his aggressive batting and range of shots. Rahul was run out in the final over for 80 off just 52 balls, his quickfire knock studded with six fours and three sixes.

For the Aussies, leg-spinner Adam Zampa was the pick of the bowlers with figures of 3/50.

Put in to bat first by Aussie captain Aaron Finch, India got off to a steady start with Rohit and Dhawan looking in control of proceedings on a flat deck which later proved to be a batting paradise.

The pair added 81 runs for the opening wicket in 14 overs with Dhawan looking in sublime touch and Rohit also finding the middle of the bat. Zampa broke the stand as he trapped Rohit in front. Rohit missed a sweep but felt the ball was missing the leg stump and went for a review only to be proven wrong.

But it did not dent India’s surge as Kohli walked in — back at his usual No. 3 position after dropping a rung in the first ODI — to join hands with Dhawan for a century-run partnership in which Dhawan score 61 runs.

The Delhi southpaw looked good to score a hundred but against the run of play, holed out to Mithcell Starc at fine leg off Kane Richardson in the 29th over.

It was, nonetheless, an innings to cherish as Dhawan continued his love affair with Australia by driving, cutting and sweeping to perfection. Dhawan brought up the 100-run stand with Kohli with a delectable straight drive over Richardson’s head just before getting out.

Just after the Dhawan show, Kohli took over in his peerless fashion. The ace batsman played some exquiste shots and kept the scoreboard ticking with some excellent running to propel India to 249/3 in 40 overs.

But just as he and Rahul looked to tee off in the last 10 overs, Zampa sent Kohli back in the 44th, this time thanks to a brilliant relayed catch on the fence which was completed by Starc. Ashton Agar, who had an off day with the ball, took a clean catch about six inches from the rope and lobbed the ball over to Starc as the Aussies broke the 78-run stand for the fourth wicket.

Australia got another wicket in the next over, Manish Pandey (2) getting caught by Agar cheaply off Kane Richardson.

But Rahul ensured a collapse like the last game was not on the cards as he hit Starc for 15 runs in the 46th over to bring up his fifty as India rode his fireworks to pile up 91 runs in the last 10 overs.

Rahul looked at his best when he came up against Pat Cummins who had bowled brilliantly till then albeit without a wicket. Rahul hit him for two fours despite his first three balls getting the better of the batsman as 14 came of the 49th over. Crossing the 350-run mark was on the card, but sadly Rahul’s dismissal left India 10 short.