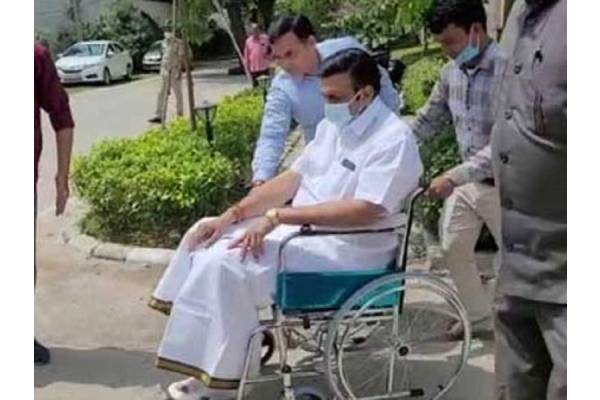 All said and done, Raghurama Krishna Raju is a Member of Parliament. When an MP goes around in a wheelchair in Delhi complaining of ‘custodial torture’, naturally it would draw critical attention. Now, Rajugaru is on a single minded mission to mobilise as much sympathy as possible by continuing his ‘wheelchair’ yatra in the national capital. He has already met with Union Minister Rajnath Singh and submitted his complaint. Soon, he is also meeting with the PM and Amit Shah.

The ‘wheelchair’ yatra has come as a big embarrassment to the YSRCP MPs and its social media activists. Even, Vijay Sai Reddy is under great pressure on how to counter this new tactic. In the beginning, the political circles thought that Mr. Raju would give a break to his political attacks after the alleged custodial beating.

However, the rebel MP was continuing his mission without any interruptions. Without feeling shy or personal prestige, Mr. Raju is going around in Delhi and telling everyone how the AP Government and the AP CID had put him to ‘custodial torture’. It came as a surprising shock to even the YCP leaders since the rebel MP was not the least afraid to attack the YCP regime after all that has happened.

Raju loyalists say that their wheelchair yatra will continue till justice is done to him. Nobody can do anything to curtail Raju’s freedom in the national capital.