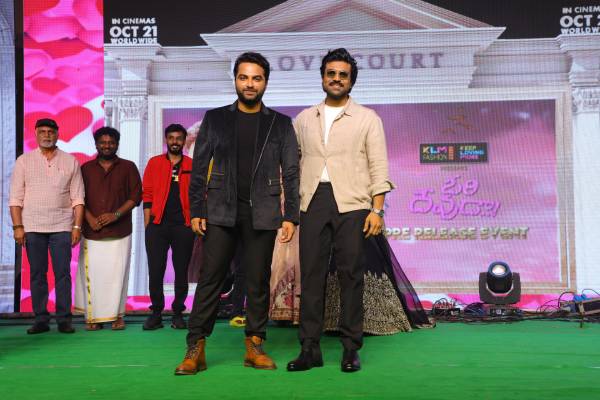 Vishwak Sen is gearing up for the release of his upcoming film titled Ori Devuda with Little Things fame Mithila Palkar and Asha Bhat. The film reached into eveyones heart with the promotional content. To take the buzz to the next level, the producers invited Pan India sensation Ram Charan to the pre-release event.

The entire cast and crew were present, and everyone shared their experiences. Finally, Ram Charan entered the stage and spoke about the actors and the film.

“I didn’t watch the original version, but I recently saw the trailer of Ori Devuda and it was fantastic with the fun and fantasy premise, and now I’m eagerly awaiting this movie on October 21st,” he stated.

Talking about Mithila Palkar he said “my wife Upasana and me are biggest fans of her series Little Things. We are eagerly waiting for the next season. Mithila Palkar is OTT superstar.”

Ram Charan’s words and appearance helped the picture reach a wider audience. Following the team’s confident statements, everyone is eager to enjoy this romantic entertainer with family.