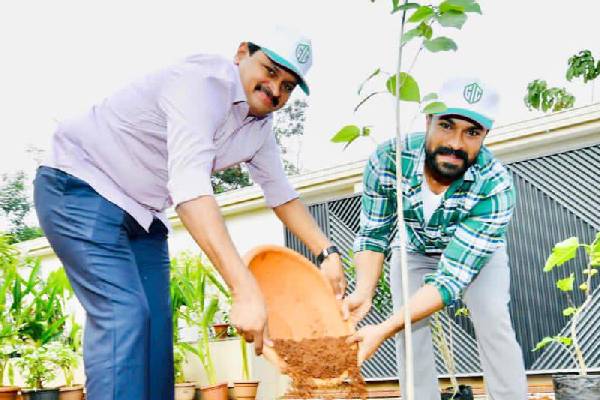 Telangana MP Santosh Kumar along with the government of Telangana initiated ‘Green India Challenge’ to plant 3 saplings and nominate three others. Several celebrities from Telugu film industry participated in the challenge and nominated their close friends. The latest one to join the list is Ram Charan. The top actor accepted the challenge from Prabhas and he planted three saplings. He further nominated SS Rajamouli, Alia Bhatt along with the entire team of RRR.

Charan urged his fans to plant three saplings and continue the chain. He specially thanked MP Santosh Kumar for the initiative. Ram Charan and NTR are busy with the shoot of RRR which is happening in and around Hyderabad. SS Rajamouli is the director and DVV Entertainment are the producers.

I've accepted #HaraHaiTohBharaHai #GreenindiaChallenge
from #Prabhas and planted 3 saplings. Further I am nominating @ssrajamouli, @aliaa08, entire my #RRRMovie team and all my fans
to plant 3 trees & continue the chain. Special thanks to @MPsantoshtrs for taking this initiate. pic.twitter.com/oQpl42PA3i