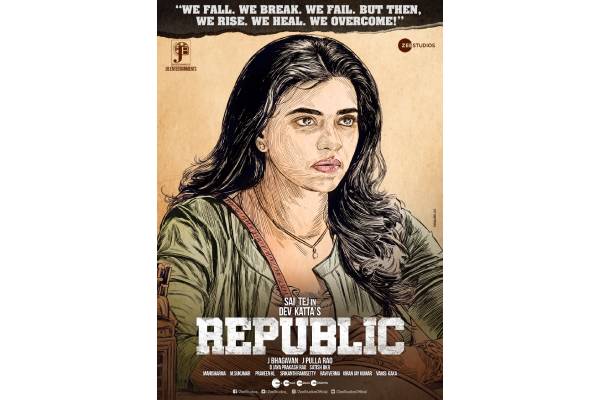 The first look of Myra Hanson, the character played by Aishwarya Rajesh in Dev Katta’s Republic, was today unveiled by Ramya Krishna.

The poster shows a sketch of Aishwarya Rajesh in a modern attire and serious look, and it carries the words: “We fall. We break. We fail. But then we rise. We heal. We overcome!”

The film which has Sai Tej as protagonist will be hitting the screens on October 1 for Gandhi Jayanthi weekend.

Bankrolled by J Bhagawan and J Pullarao on JB Entertainments banner in association with Zee Studios, the film is tipped as an intriguing social drama, that primarily focuses on the three pillars of democracy legislative, executive and judiciary.

Jagapathi Babu and Ramya Krishna are playing pivotal roles in this flick. Mani Sharma is taking care of music department.