Comedian turned hero Sunil is in need of a commercial hit right now and he is expecting that with 2 countries film he will bounce back to limelight again. As a part of last-minute promotions, Sunil had a media interaction today and along with talking about 2 countries release this weekend, he also mentioned the reason behind walking out of PSPK25.

Sunil said initially director Trvikram wanted him to be part of Agnyaathavaasi movie and he agreed to it. But after the full script got developed, Sunil wasn’t happy with the way his role got shaped up and he conveyed the same to the director. Trivikram understood Sunil’s concerns and the conversation had a happy ending as both shares a close friendship with each other said, actor. Trivikram has got the best comedy out of Sunil when they worked together, movie buffs have to wait little longer for both of them to come together again. 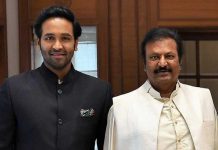