Switch to: తెలుగు
Home General RK Beach is all set to create history 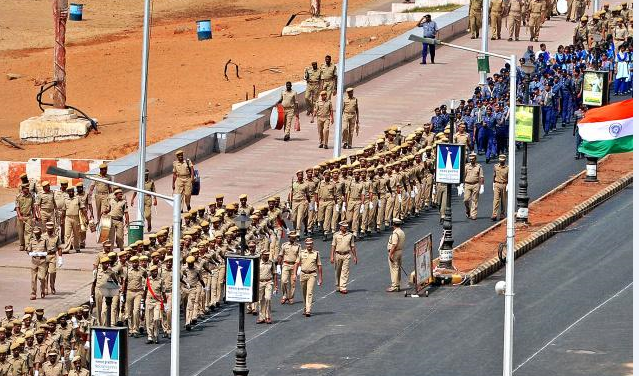 Vizag’s Ramakrishna Beach is waiting for unfurling of tricolor tomorrow on the occasion of 69th Independence day. Andhra Pradesh, being a state-without own capital, is celebrating the I-day outside its temporary capital, Hyderabad. Last year, the first I-Day, after Andhra Pradesh was divided, was celebrated in Kurnool, the first capital of Andhra state formed in 1953 with Telugu speaking districts of Madras state. No state in India celebrates its state I-day in districts. Ramakrishna beach will go down in the history as the beach which hosted I-Day celebrations.

This year, the government has chosen Vizag for the occasion and Ramakrishna beach has become the venue. Vizag beach is named so because of the location of Ramakrishna mission at the beach.
Tight security arrangement have been made in the city in the wake warnings of a possible terror strike. About 2500 personnel have been pressed into security duty of the town and the venue. Navy, coast guard and CISF have kept their watchful eye along the coastline. Besides dog squads, 44 bomb squads are keeping a constant vigil on the movements of suspects in city’s hubs.
Seating arrangement has been made for about 25,000 visitors and the government is expecting about 50,000 people to watch at the venue.