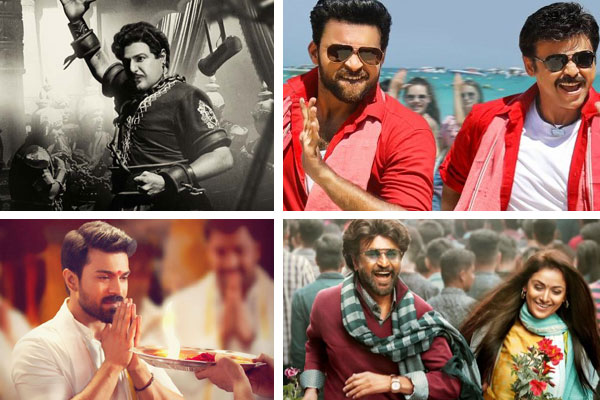 Sankranthi is one of the biggest and best seasons for films in Telugu cinema. 2019 Sankranthi is said to be quite interesting as NTR, Vinaya Vidheya Rama and F2 are testing their luck during the season. Rajinikanth’s Petta too will compete with these Telugu biggies during Sankranthi. This festival season is sure quite special as Tollywood audience will witness three major genres. The total bet during Sankranthi 2019 is said to be over Rs 200 crores. Let’s have a look at the releases:

NTR – Kathanayakudu: The Story of a Legend:

Nandamuri Balakrishna wanted a perfect tribute for his father late NTR and he stepped into the shoes of his father’s biopic titled NTR. Krish added grandeur and extra colour for the film which is abilities. The trailer looked promising and created huge buzz all over. Nandamuri Balakrishna looked perfect as NTR and the film is expected to impress all the sections of audience during the season. NTR – Kathanayakudu releases on January 9th.

Tollywood audience always vote for mass masala films during festival seasons. Vinaya Vidheya Rama is one such film that has scope to rake massive numbers during Sankranthi. Ram Charan and Boyapati added extra mileage for the project. Vinaya Vidheya Rama trailer revealed the film is a treat for masses and action film lovers. The movie unit says that Vinaya Vidheya Rama even has a dose of family drama that can bring family crowds to theatres. The film hits the screens on January 11th.

F2: Fun and Frustration is a multi-starrer that features Venkatesh and Varun Tej in the lead roles. Directed by Anil Ravipudi, the teaser and songs looked promising and revealed that the film will be high on rib tickling entertainment and a pure emotional drama. F2 is a clean and perfect family entertainer to watch with the entire family. F2 releases on January 12th all over.

Superstar Rajinikanth is competing with Petta along with these Telugu biggies. Directed by Karthik Subbaraj, Petta promises to be high on action and mannerisms of Rajinikanth. The film is hitting the screens on January 10th and the film will sure be a feast for Superstar’s fans. Rajini will be seen in dual shades in this action drama.

We have to wait for some more time to see which film dominates at the Sankranthi box-office.