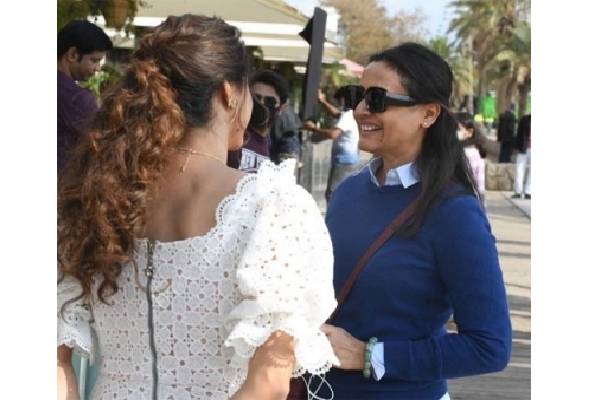 Mahesh Babu and Keerthy Suresh-starrer ‘Sarkaru Vaari Paata’ is being shot at a good pace. As the makers have zeroed in on the release date after a couple of months, the whole team is dedicated to wrapping up the shoot as soon as possible.

Mahesh Babu’s wife Namrata Shirodkar, who is accompanying him during the shooting, has given an exclusive update from the sets. The shooting schedule is to wrap up a song and small other scenes featuring Mahesh Babu and Keerthy Suresh. Namrata’s Instagram post hints at the fun they are having on the sets of ‘Sarkaru Vaari Paata’, in Barcelona, Spain.

“Bts … Meet n greets .. song in progress .. #svp,” Namrata wrote, as she shared a picture with Keerthy Suresh. Though nothing much was revealed, Keerthy Suresh appears glammed up, as she is seen having fun with Namrata on the sets of the upcoming commercial entertainer.

Directed by Parasuram Petla, ‘Sarkaru Vaari Paata’ is a commercial, action entertainer. Slated for a huge release for Makar Sankranthi, the movie marks the first collaboration of Mahesh with ‘Mahanati’ actress Keerthy Suresh.