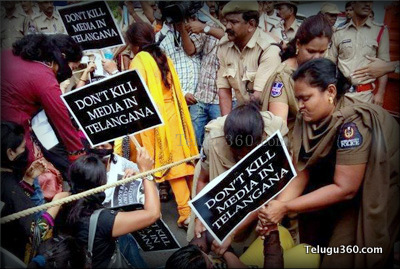 [dropcap]W[/dropcap]ith Andhra Pradesh police serving notices on a vernacular news channel, T News, journalists across Telangana state staged protests and held demonstrations against the act alleging that it was an attempt to curb the freedom of press.

Notably, the Andhra Pradesh police-in its notice- stated that the news channel, T News, disturbed the public tranquility by telecasting Andhra Pradesh chief minister Chandrababu Naidu’s alleged telephonic conversation with Telangana’s nominated MLA, Elvis Stephenson. It may be noted that the police served notices based on complaint of an advocate from Vizag.The notice went on to mention that the programme that was aired on June 7 night affected the maintenance of public order, which violated Section-5 of Cable TV News Network Act. It may be recalled that T News had telecast the audio conversation between Babu and Stephenson shortly after the arrest of TDP MLA from Telangana region, Revanth Reddy.

[pullquote position=”left”] Indian Journalists Union’s (IJU) secretary general, Devulapalli Amar condemned the incident and said that none in the world has the authority to question the media of its sources. [/pullquote]

What are the possible sections that can be invoked?

The legal experts said that it would have been better and significant in case the following sections were invoked—IPC Sec499 (defamation), IPC Sec502 and IPC Sec120B (criminal conspiracy). They were apparently puzzled as to why these chose Cable TV Network Act. Was it an attempt that would presumably make KCR to strike a compromise deal with Babu, they questioned among themselves.

Attack on the media?

The journalists in Telangana region reacted vehemently to the notices that were served by the police against T News. A large number of scribes gathered outside the DGP office of AP Police in Hyderabad. The sources said that nearly 100 journalists were already taken into the custody.  Meanwhile, the Indian Journalists’ Union (IJU) secretary general, Devulapalli Amar condemned the incident and said that none in the world has the authority to question the media of its sources. Serving notices to media is an attempt to curb press freedom, he added.

Telangana BJP president and MLA, Kishan Reddy has responded to the notices served on T news. He has said that BJP was not against the freedom of press. He, however, criticised KCR and Chandrababu Naidu for indulging in political war.

It now looks like Chandrababu Naidu purportedly crossed swords with freedom of the press. How these cases can curtain press freedom is still a debatable issue.