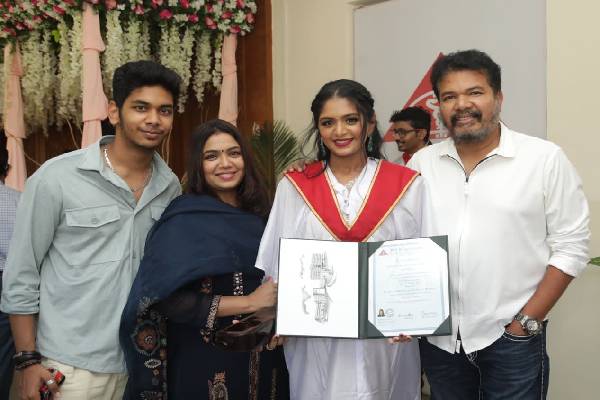 Ace director Shankar’s daughter Aditi Shankar, who is making her debut as an actress in the Tamil films with ‘Viruman’, has announced that she had now officially become a doctor.

The young actress, who posted picture of herself receiving her degree and holding her degree with dad on her social media account, said on Friday, “Here’s to all the fun memories, late nights and mugs of coffee that got me here! Officially Dr Aditi Shankar #graduationday #endsandbeginnings”

It was only in September this year that it was announced that Aditi would be turning an actress.

‘Viruman’, through which Aditi will be making her debut as a heroine, features actor Karthi in the lead and is produced by actors Suriya and Jyothika.

The film is being directed by Muthiah, who had earlier directed Karthi’s hit film ‘Komban’.

Apart from Karthi and Aditi, Viruman will also feature Raj Kiran, Prakash Raj and Soori in important roles. The film is expected to hit screens early next year.