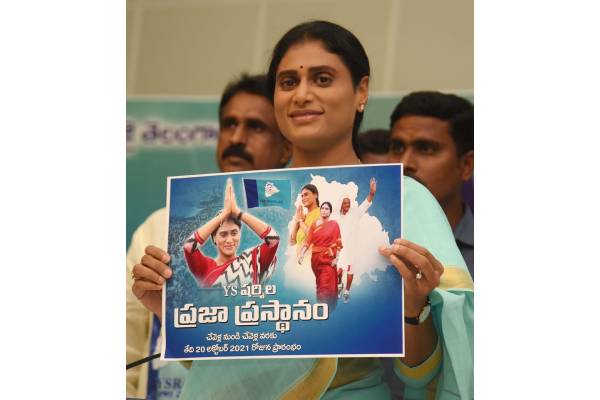 YSR Telangana Party (YSRTP) leader Y.S. Sharmila announced on Monday that she will be launching her ‘padyatra’ from October 20.

She plans to cover all Assembly constituencies except those coming under the limits of the Greater Hyderabad Municipal Corporation (GHMC).

The daughter of former Andhra Pradesh Chief Minister Y.S. Rajasekhara Reddy will be launching the walkathon titled ‘Praja Prasthanam’ from Chevella and it will also conclude there.

YSR, as the late Chief Minister was popularly known, had launched his famous padyatra from the same place and with the same title in 2003. The padyatra in then undivided Andhra Pradesh had catapulted the YSR-led Congress to power, ending the nearly a decade-long rule of the Telugu Desam Party (TDP) headed by Chandrababu Naidu.

Sharmila, who floated the YSRTP on YSR’s birth anniversary on July 8, announced that she will be covering 12 to 15 km every day.

The sister of Andhra Pradesh Chief Minister Y.S. Jagan Mohan Reddy said YSR will be the brand ambassador of her walkathon. “I am undertaking this padyatra to achieve the ideals of the great leader,” she said.

The YSRTP founder said she would highlight the failures of Telangana Rashtra Samithi (TRS) government.

She also announced that her weekly fast over the issue of unemployment will continue as part of the ‘padyatra’.

Sharmila has been staging a fast every Tuesday after consoling the family of an unemployed who committed suicide. She vowed to continue the weekly fast till the problem of unemployed was addressed.

She reiterated that she wants to bring back ‘Rajanna rajyam’ in Telangana.

‘Rajanna rajyam’ is referred to the rule of YSR (2004-2009) during which he implemented many revolutionary schemes for welfare of poor and the weaker sections of the society.

Sharmila alleged that during seven-year-rule of K. Chandrasekhar Rao in Telangana, 7,000 farmers have committed suicide and KCR went back on his promise to waive farm loans. She claimed that the TRS government headed by KCR waived loans of only 3,000 farmers were waived while 30 lakh farmers were betrayed.

According to a YSRTP leader, a survey shows that 91 per cent of Telangana farmers have loans of at least Rs 1.5 lakh each.