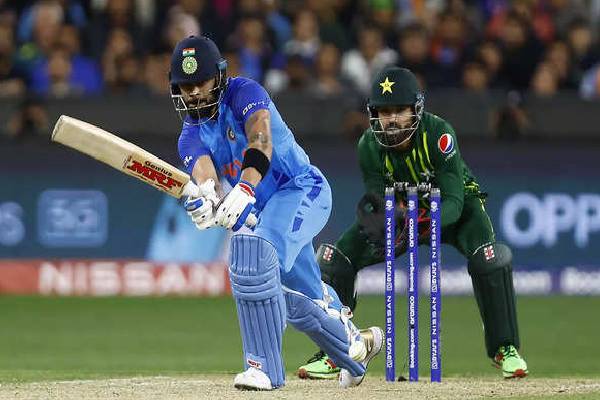 Virat Kohli re-iterated on Sunday why he is considered one of the best chasers in cricket, slamming an unbeaten 82 off just 52 balls to power India to an incredible four-wicket victory over archrivals Pakistan in a thrilling Super 12 match of Men’s T20 World Cup in front of 90,293 fans at a sell-out Melbourne Cricket Ground on Sunday.

After the right-left fast-bowling duo of Hardik Pandya and Arshdeep Singh picked three wickets each to restrict Pakistan to 159/8 in their 20 overs, Kohli and Hardik Pandya (40) shared a match-winning stand of 113 off 77 deliveries, lifting India from 31/4 to 160/6 on the last ball of the match to get their campaign off to a winning start.

In their chase, India were struck a huge blow when K.L Rahul chopped onto his stumps while trying to defend against Naseem Shah in the second over. Two overs later, Haris Rauf had Rohit Sharma poking tentatively at a 145kph length ball and the thick edge flew to the first slip, who dived low to pouch a blinder of a catch.

Suryakumar Yadav sweetly punched a drive off Rauf and then pulled off the front foot over mid-wicket to collect a brace of fours. But the right-arm pacer had the last laugh as his back-of-the-length ball on stumps cramped Suryakumar for room, who looked to cut the ball away.

All he could do was to nick behind to the keeper, leaving India at 26/3 in 5.3 overs. Things went from bad to worse for India as a mix-up in the middle for a non-existent single resulted in run-out of Axar Patel.

Kohli and Pandya took some time before opening up against Pakistan’s spin twins, leg-spinner Shadab Khan and left-arm spinner Mohammad Nawaz. Pandya began by drilling a drive straight down the ground off Shadab before he smacked sixes over long-on and deep mid-wicket off Nawaz, sandwiched between Kohli launching a glorious six over long-on to make it 20 runs off the 12th over.

Apart from collecting plenty of twos with Pandya, Kohli brought out his deft touch with a fine glance off Shaheen, playing the cut off his wrists past deep cover off Shadab and flicked past a diving short fine-leg off Naseem to collect three quick fours.

On the back of India scoring 55 runs in 11-15 overs, Pakistan brought back Rauf and Shah and the duo gave away just six runs each in the 16th and 17th overs respectively. With 48 needed off the last three overs, Kohli brought up his fifty by fetching a short ball from outside the off-stump to pull Afridi through mid-wicket for four and ended the over with another four, swivel-pulled over short fine leg.

Kohli then smacked back-to-back sixes off Rauf — a straight loft down the ground was followed by using the pace of the ball to flick off wrists over fine leg — to make it 16 runs needed off the final over.

Nawaz dealt a huge blow on the first ball of the final over when he had Pandya miscuing the slog and the thick edge went to cover-point. On the fourth ball, Kohli smacked a waist-high full toss high over deep square leg fence which was called a no-ball.