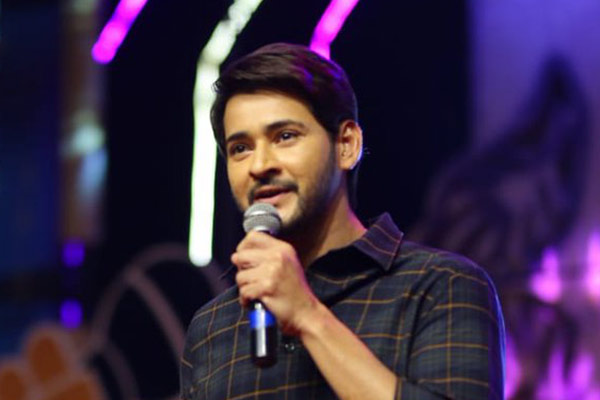 Young actor Vishal’s Abhimanyudu has been declared as the biggest hit in his career. Despite of several releases, the film is having a dream run and is raking decent revenues across the Telugu states. Superstar Mahesh Babu happened to watch Abhimanyudu and he could not wait to leave the unit in heaps of praises. Mahesh congratulated Vishal and his team for a well-researched and fast paced action thriller.

“Very impressed with Abhimanyudu. The vision & direction of @Psmithran is skilfully conveyed.. A well-researched and fast paced film… Hearty congratulations to @VishalKOfficial and the entire team!” posted Mahesh on his official twitter handle. PS Mithran directed Abhimanyudu and Samantha, Arjun essayed other interesting roles. Abhimanyudu is all about cyber crimes tipped with a social message for the society. Vishal Film Factory bankrolled Abhimanyudu.

Very impressed with Abhimanyudu. The vision & direction of @Psmithran is skilfully conveyed.. A well-researched and fast paced film… Hearty congratulations to @VishalKOfficial and the entire team!👏👏 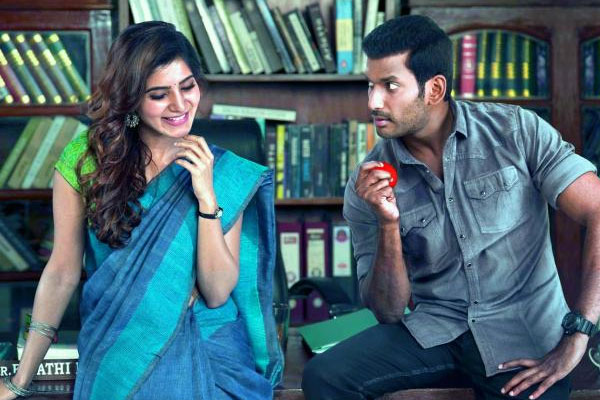 Abhimanyudu has collected a distributor share of over 7.5 cr by the end of it’s 3rd weekend in Telugu States. The film is a SUPER HIT and also emerged as the highest collected Telugu dub film in Vishal’s Career. Gross of the film in Telugu States will be more than 16cr.

Below are the area wise 17 days Shares 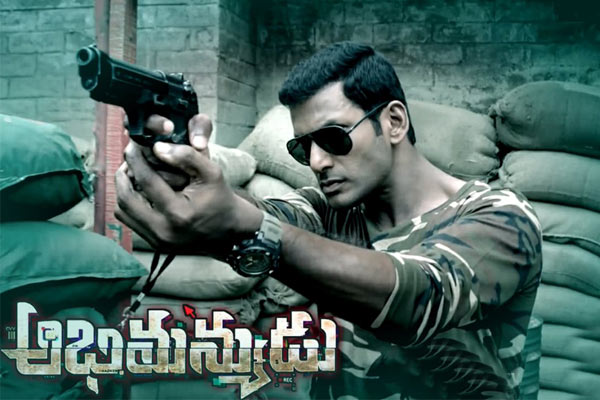 Abhimanyudu has registered good collections for a Vishal starrer after a long time in Telugu States. The film has collected a distributor share of over 3 cr over it’s first weekend in Telugu States. Theatrical rights of the film are valued at 4.3 cr which means a recovery of an approx 75 percent already. The film is likely to emerge as a Hit. 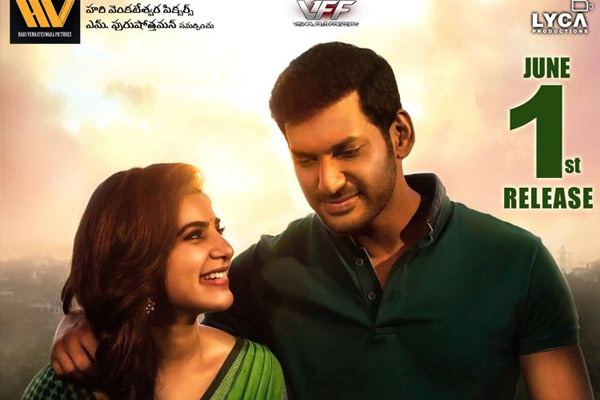 Young actor Vishal who scored a decent hit with his last film Detective is back testing his luck with Abhimanyudu. The Tamil version Irumbu Thirai released all over Tamil Nadu and has been declared as a blockbuster. The Telugu version Abhimanyudu got delayed and is now hitting the screens on June 1st along with a bunch of Telugu movies. Vishal will be essaying the role of a military officer and Abhimanyudu discusses about cyber crimes.

Samantha is the female lead and she essays the role of a doctor. Action King Arjun is the lead antagonist and Yuvan Shankar Raja composed the music. Vishal Film Factory produced Abhimanyudu and Lyca Productions acquired the distribution rights of this action thriller.

It’s a wrap for Vishal’s Abhimanyudu

Young actor Vishal has been busy with the shoot of his next film titled Irumbu Thirai. The film has been titled Abhimanyudu in Telugu and is a new age action thriller. PS Mithran is the director of the film and Action King Arjun is essaying the role of the lead antagonist in the movie. Samantha is romancing Vishal in Abhimanyudu and she is essaying the role of a doctor. The entire shoot of the film has been wrapped up today in Chennai and the post-production work is currently on cards.

With lot of films hitting the screens during Sankranthi, the makers are keen on releasing Abhimanyudu on January 26th during the Republic Day weekend. The teaser of the film has been launched last evening in Chennai and Yuvan Shankar Raja composed the tunes. During the teaser launch, Vishal revealed that Irumbu Thirai is a crucial film for him as an actor as well as a producer. It was great working with Samantha expressed the actor. Vishal Film Factory bankrolled Irumbu Thirai. 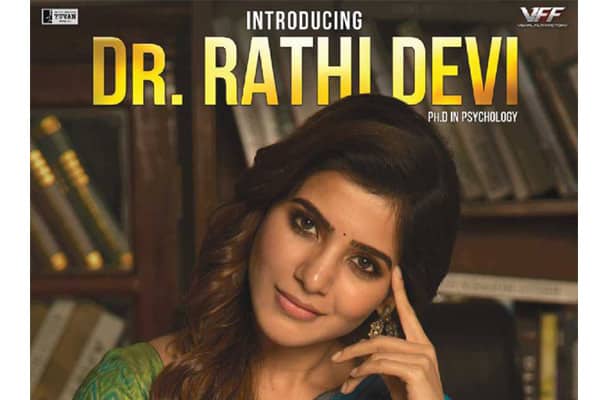 Samantha Akkineni is working round the clock to wrap up all her work commitments she signed before marriage. Her first outing post marriage is a Tamil-Telugu bilingual titled “Abhimanyudu” which is an action thriller starring Vishal in lead role and it is slated for release in last week of January 2018. Last month working stills of the lead pair are revealed and netizen went gaga over the traditional saree look of the Samantha.

Now Samantha’s role got disclosed from Abhimanyudu. Sam is going to play the character of a doctor in the movie and it’s an important role that has a scope for performance added sources. Samantha is always seen in cute, bubbly role and it will be interesting to watch her in a doctor character. P. S. Mithran is making his directional debut with this movie and Yuvan Shankar is composing the music. Vishal is producing the film in his home banner and he is confident about the success of the project. Keep watching the space for more updates.

Vishal walks out of Sankranthi Race 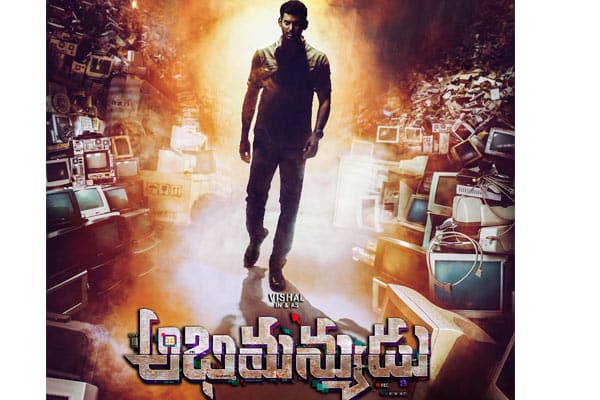 Young actor Vishal who has been extremely convinced with the response of his last movie Detective is busy wrapping up his next film titled Irumbu Thirai. The movie is said to be a bi-lingual and has been titled Abhimanyudu in Telugu. Directed by PS Mithran, Abhimanyudu is in final stages of shoot. The actor released the first look of the movie some time ago and he announced that Abhimanyudu will hit the screens during Sankranthi 2018. Samantha is the female lead and Action King Arjun will be seen in a crucial role.

Now the latest news is that Abhimanyudu walked out of the Sankranthi race with many films occupied for release during the season. The makers are keen on releasing Abhimanyudu during the Republic Day weekend and an official announcement is awaited. Yuvan Shankar Raja composed the music and Vishal Film Factory bankrolled Abhimanyudu. On the other side, Suriya’s latest outing Gang is all set for release during Sankranthi 2018 and UV Creations will be releasing the Telugu version. 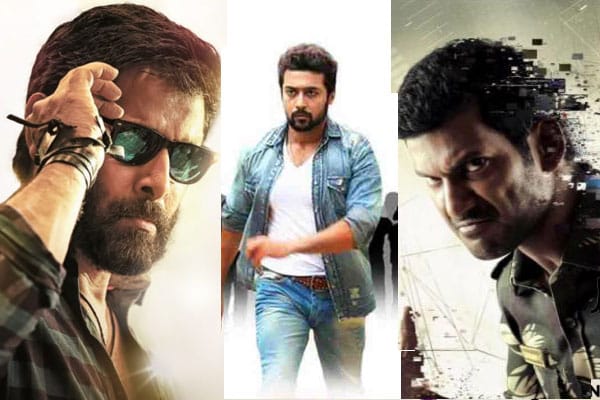 Sankranthi 2018 is getting bigger with each passing day. Already Pawan Kalyan’s Agnatavaasi, Balakrishna’s Jai Simha and a couple of medium budget films have been confirmed to release during the Sankranthi season. Now, it has been revealed that three noted Tamil biggies will challenge Telugu films at the Sankranthi box office.

Vishal’s Abhimanyudu, which has Samantha as the female lead, has been confirmed to release in Telugu for Sankranthi. The action thriller directed by PS Mitran will get a decent release in Telugu states considering Vishal’s market here.

Talented Tamil superstar Suriya has joined the Sankranthi race with his upcoming film Thaana Serndha Kootam which is likely to be titled as Kaisar in Telugu. Vignesh Sivan is the director for the film and Keerthi Suresh is the heroine. As Suriya carries good craze in Telugu states, this film is likely to have a solid release in Telugu as well.

Also in the Sankranthi race is versatile Tamil actor Vikram’s Sketch which is in the making since a long time. Starring Tamannaah as the female lead, Sketch is directed by Vijay Chander. The film will simultaneously release in Telugu and Tamil on Jan 12th.

So, it is going to be a jam-packed Sankranthi season at the Tollywood box office.