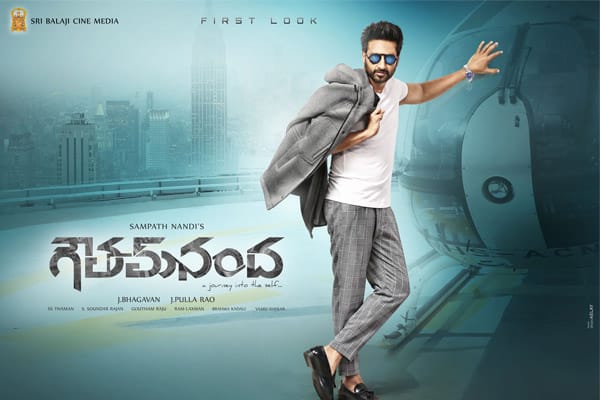 Story:
Gautam (Gopichand) is the only son of a rich businessman Vishnu Prasad (Sachin Khedekar) ranked among top 50 by Forbes. Gautam leads an ultra-lavish lifestyle, always partying until he encounters an eye-opening situation in pub. In pursuit of his identity, he endures a road trip where he runs into Nanda. It comes as a shocker to Gautam and Nanda that they both look alike. Nanda belongs to an inferior middle-class family who reside at a slum in Hyderabad. After knowing his story, Gautam decides to live in the Basthi masquerading as Nanda. The rest of the story revolves around what happens in the lives of the look-alikes after they switch their identities

Analysis:
The story has nothing new to offer but the message that the director wanted to convey is good. “Though money is most important in our life, real happiness lies in emotional things and family bonding” is the point the director picked. However, the justification was not that engaging.

Gopichand’s rich character especially in Gautam’s introduction, his palatial residences, swanky cars and exotic life style has been portrayed satisfactorily. Likewise, the character of poor Nanda, his daily routine as a basthi guy was shown well. After the contrasts in the lifestyles have been established, the crucial decision to switch the identities did not look appealing. Two songs (Zindagi Na Milegi Dobara, Basti Dorasani) which were picturized stylishly looked good on screen. Vennela Kishore and Bitthiri Satthi comedy track is adequate in first half.

However, the villains attempt to kill Gautam and subsequent scenes fail to impress. The family sentiment scenes woven around Nanda’s family look forced and unimpressive. Catherine Tresa in a glamourous role is good and provided commercial elements with her generous skin show in bikinis. Hansika Motwani’s role was insignificant.

The very fact that nobody noticed the striking similarity between Nanda and Gautam’s face is unimpressive, especially with Gautam being a billionaire’s son and a party animal. The reason for Gautam to give up his luxuries and swap the identity was inadequate. Villainy has not been established properly.

In second half, another song Bole Ram Bole Ram is also quite impressive. However, the story and events slow down with the imposition of forced sentiment scenes. The major twist in middle of the second half and another one towards the climax evoke a bit of interest. But it is too late by then.

Director Sampath Nandi who succeeded in bringing stylish look to the film has failed in handling the key second half. Dialogues are pretty boring.

Performances :
Gopichand impresses in both the roles and it is his show all the way. Except for some comedy track, the roles of villains and heroines are limited, specifically with Gopichand’s dual role taking most of the screen time. Catherine Tresa is glamorous and looked steamy in bikinis. Hansika, in her sort of comeback film, is just OK as her role is limited. Sachin Khendeker , Mukhesh Rushi , Nikitin dheer are wasted. Vennela Kishore, Bitthiri Sattthi roles are an average fare and they as usual performed well.

Verdict:
Gautam Nanda is a high budget stylish commercial film that totally relies on Gopichand’s strengths. In a dual role, he is impressive but the movie is easily predictable. With the growing competition around, this film may find limited space at the box-office.