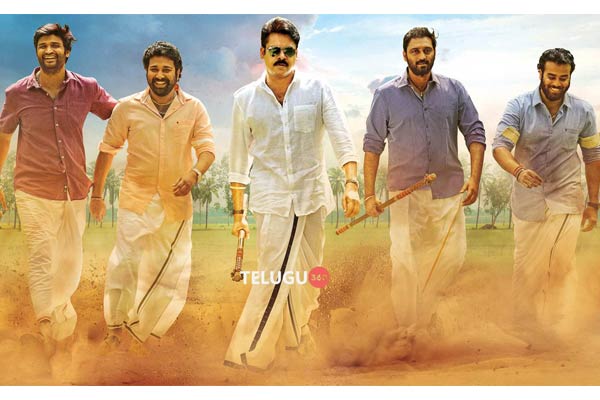 After a brief lull at the box office, Pawan Kalyan’s Katamarayudu kick starts the Summer fest for movie goers. The movie is released worldwide today(March 24). With Katamarayudu , which is the remake of Tamil movie Veeram, Powerstar Pawan Kalyan is back testing his luck. Kishore Pardasani directed this village based emotional entertainer and Shruti Haasan essayed the female lead. North Star Entertainments bankrolled the film and Anup Rubens is the music composer. Here is the film’s review:

Katamarayudu (Pawan Kalyan) is the head of a village based in Rayalaseema who leads a pleasant life along with his four brothers (Siva Balaji, Ajay, Chaitanya Krishna and Kamal Kamaraju). Rayudu’s aversion towards women irks his brothers. It is during this time Avanthi (Shruti Haasan) walks into his life. With the support of his brothers, Katamarayudu gets convinced and expresses his love. Rayudu realizes about the hidden problem in Avanthi’s family and the rest of the film is all about how he brings out their family from the problem and win his love. Watch Katamarayudu to know about the complete story.

The first half of Katamarayudu looks fresh and entertaining throughout. The way Pawan Kalyan has been projected will leave everyone in surprise. The songs could have been shot better, they do not sound melodious either. Pawan has been extremely simple and decent which is sure a treat for the audience to watch him on screen. The pre-interval episodes look dragged and the action episode in the train looks completely fake and unusual. Ignoring this, the rest of the first half is sure an impressive show.

The second half of Katamarayudu takes an emotional turn and it will sure disappoint the audience at parts. However, the film picks up back and manages to keep the audience engaging. The emotional episodes and the performance of Pawan Kalyan keeps the film hold well though it looks completely predictable. The dose of action too may bother the family audience and the climax ends the film on a predictable note. The songs in the second half look just ok. On the whole, the second half of Katamarayudu is slow and mediocre.

Pawan Kalyan has been simple, relaxed and subtle in the assigned role. He looks uber cool throughout the film and his performance is the major highlight of Katamarayudu. He carried the entire film on his shoulders. Shruti Haasan has been quite decent in emotional parts of the film and she looked completely beautiful. The songs reveal that Shruti gained weight and is out of shape. Rao Ramesh, Tarun Arora, Pradeep Rawat and others elevated the film with their packed performances. Ali, Prudhvi, Siva Balaji, Ajay, Chaitanya Krishna and Kamal Kamaraju have been quite supportive throughout the movie and their performances need a special mention.

The story of Katamarayudu is predictable and outdated. However, the way the film has been presented impresses the audience. The screenplay and the dialogues looked decent throughout. The music and the background score are a huge let down for Katamarayudu. The cinematography showcased some beautiful village locales and brought a new feel. The production values look just adequate and Kishore Pardasani made sure that Katamarayudu is molded out into a decent family entertainer. He did a decent job.

Katamarayudu is a good entertainer for fans and masses. Pawan Kalyan’s getup, controlled performance are major assets, he carries the movie on his shoulders effortlessly. Poor songs, mediocre production values are the negatives. Summer holidays, lack of competition and Pawan’s box-office stamina may make this movie a commercial success in India. In overseas, we need to wait and see how audience will embrace this routine film.