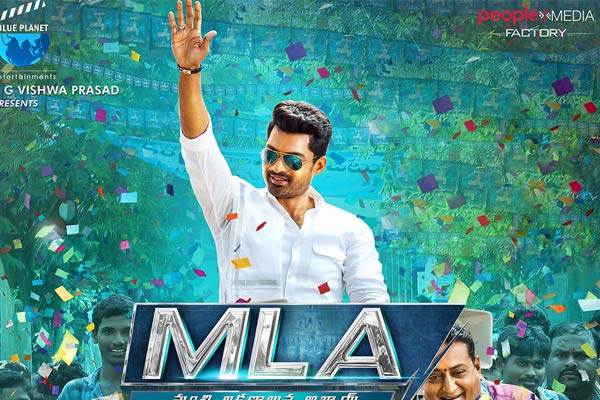 MLA has Kalyan Ram playing a common man who takes the political route under dire circumstances. The trailers have hinted that MLA puts the Pataas actor in a completely different zone with an interesting characterization. This is a very crucial film for Kalyan Ram as he is going through lean phase as an actor. Kajal Aggarwal is the film’s leading lady. Mani Sharma is the music composer. After good round of promotions, MLA is all set for release today( March 23). Let’s see if MLA hands Kalyan Ram the much needed break.

Kalyan Ram and Kajal who meet by accident multiple times finally end up in the same office, where Posani is the boss. Due to a land encroachment issue with Gadappa, Kalyan Ram lays a bet with Kajal and how he goes about winning the bet to win the love of Kajal forms first half of the film.

The primary line of MLA is to give a subliminal message about child labor, who are suffering with Silicosis due to inclement working conditions. The movie also stresses the importance of child education. However,end of the day MLA ends up as regular commercial movie that sticks to tried and tested Tollywood formula. First half closely resembles Srinu Vaitla’s pastmovies where protagonist tries to outsmart the villain by doing a reality show or alternate reality. Even here, Kalyan and Kajal play a tit for tat game with villain by creating an alternate reality of living in their house. Though it is reminiscent of lot of earlier super hits like Dookudu etc, this part was decent. Twist in the interval leaves you guessing about the second half. Debutante director,Upendra Madhav, worked as Associate Writer for Baadshah and as a Script Associate for Dookudu. That influence is clearly visible in the first half. Vennala Kishore as Kalyan’s brother in law keeps first half lively. Posani as a womanizer tickles a few times with some double entendre’s

Second half is message driven, reminding you of SivaKoratala’s movies. Pruthivi as PA to Kalyan Ram and a fired PA to Gadappa does his bit. Again, in the second half it is a challenge with Ravi Kishan,who is a sitting MLA and falls in love with Kajal. Kalyan tries to bring a change in mindset of the community and realize the importance of education — though some of these are cinematic. Second half, though, is very predictable. For almost all the songs, there is no proper premise and come as speed breakers.

Kalyan Ram as MLA fits well in the character and Kajal as Indu make a good pair. Walking out of the movie, one feels that the writer in Upendra Madhav dominates the director. SyamK Naidu who handled the camera for songs did a good job. Music and editing are par for the course.

Bottom Line: If you’re looking to kill sometime and are interested in Tollywood commercial movies, you might watch it once.