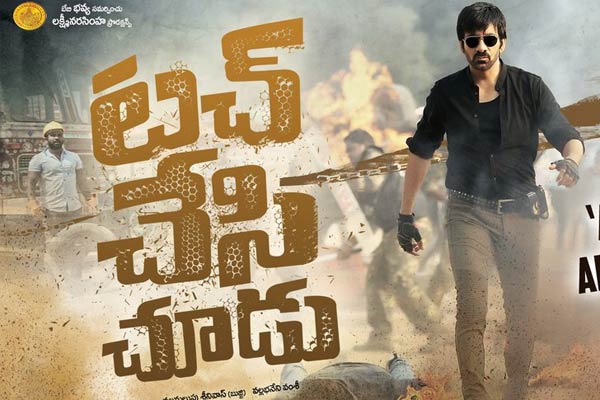 Mass Maha Raja Ravi Teja is back on the radar with the successful hit film Raja The Great and he is ready for his next release Touch Chesi Chudu on 2nd February, 2018. While the promotions for Touch Chesi Chudu has begun with releasing one song after the another online by the makers and the idea is working in favor of the movie team.

Recent released Manasa song has hinted the glam quotient of both the heroines Raashi Khanna and Seerat Kapoor in Touch Chesi Chudu and also soothing songs are being received positively. kaushik – Akash – Guddu (KAG) of JAM8 has composed music for this film. Makers have locked the audio release date of Touch Chesi Chudu on 25th Jan, 2018 and the entire details of the venue, chief guest will be announced shortly.

Vikram Sirikonda is making his debut as director with Touch Chesi Chudu while Nallamalupu Srinivas and Vallabhaneni Vamsi have bankrolled the project. Ravi Teja is easing the cop role for which he is very popular and even heroines Raashi Khanna and Seerat Kapoor is being projected on the screen with roles that audiences have never seen them before in films. Keep watching the space for more updates.