Allu Arjun on break for enjoyment? 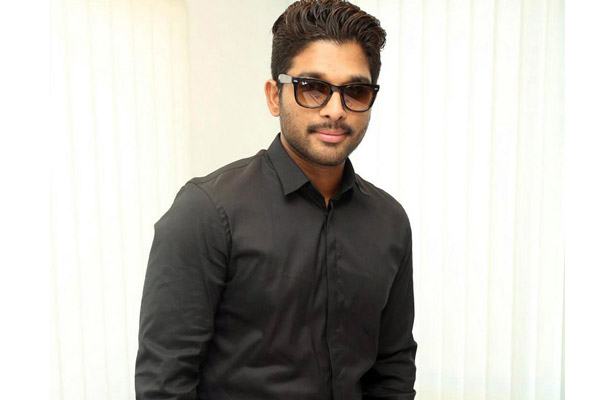 Stylish Star Allu Arjun is known for his stylish performances on silver screen. He recently stole the hearts of all with his performances in different genre roles in Race Gurram, S/O Satyamurthy, Rudramadevi and Sarrainodu .

However now he is on a break for enjoyment. Allu Arjun who became proud father again when his wife Sneha Reddy gave birth to a baby girl couple of weeks back. Now inside talk is Allu Arjun is enjoying with his daughter and also taking care of his son Allu Ayaan.

Sources say Allu Arjun will be out of action for three weeks and will resume shooting only after performing the naming ceremony of his daughter. Allu Arjun fans are happy that Allu Arjun is blessed with daughter and son and are waiting eagerly for him to share the snaps of the new born. 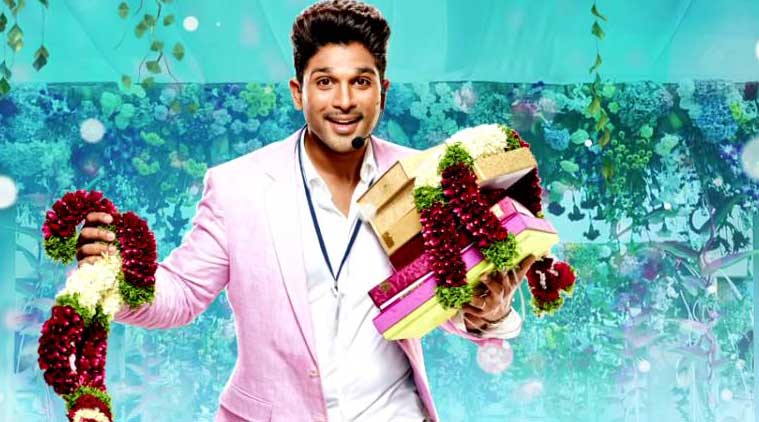 The much-awaited film from ace director Trivikram starts out with an ominous censor certificate that puts the movie length at 162 minutes. You expect plenty of fireworks because the starcast itself calls for a Tollywood party – Stylish star Allu Arjun, Kannada Superstar Upendra, Mollywood cutie Nitya Menen, Samantha, Rajendra Prasad, Sampath, Rao Ramesh, Ada Sharma, Sneha, Sindhu Tholani, Vennela Kishore,  Kota, Brahmanandam and of course, late MS Narayan. With that kind of a starburst and the scale of budgets of a generous producer like Radhakrishna, one would expect Trivikram to deliver a blistering output that will glow on screen. Instead, what you get is a not so entertaining stuff and despite a lavish extravaganza and touchpad characterisation – the persona of the film slips and something  pulls down the rating of the film in the wake  of Trivikram’s celluloid capabilities.

Get it straight, there is nothing wrong with the film or the plot or the characterisation. The story itself is narrated first like a trailer of thirty seconds with visuals cut and pasted across the length of the film and then winds its way back to the inception. Anand (Allu Arjun) is the son of Satyamurty (Prakash Raj) with a networth of Rs.300 crores. Prakash Raj dies in a car accident and the world of Anand and his family of brother, his mother and himself is turned upside down. They lose the crores because half the net worth is leveraged or no, half the networth is in equity shares or wait, there is a land parcel. Whatever the rigmarole, Anand sells the assets and pays the dues disregarding the advice of Rajendra Prasad (friend of Prakash Raj) to dupe the public and make away with the debts. Because of the values that Prakash Raj instilled in Anand and because of the goodwill of his father, Anand takes the onus of repaying all the debts by fair means. And he embarks on a journey – first to earn something to pay off his niece’s school fees. This journey takes him on voyage of self-confidence as he gains good name wherever he goes – Rao Ramesh who breaks the marriage of Allu with his daughter Ada Sharma, Samantha who gets smitten by his level-headedness in giving up three hundred crores. Destiny takes him to Rajendra Prasad again because his daughter Samantha  is in love with Allu (Anand). Anand now enters into a bet with Rajendra Prasad to get original title deeds of a property in the custody of a quasi-government authority Upendra who heads dozens of villages and maintains an army of 600 (Looks like double the number of “300”) and marry his daughter. Upendra has another daughter Nitya Menen – and there is a twist in the tale but that comes after  a lengthy characterisation. On the whole, the story despite a complicated structure is not inexplicable. It is just about a young man who is determined to keep the reputation of his dead father high long after he’s gone  and how he succeeds thanks to a strong set of values imparted by his father.

What helps the film is the framework of story-telling with utmost dignity and class. Performance by Allu Arjun breathes life into many listless moments of canned jokes and quotations and the pet peeves of Trivikram on middle class moralities and values. His dancing skills are outshined by his emoting this time – using variety of accents and impressive one-liners, Allu Arjun packs quite a punch. Upendra with a baritone voiceover by Ravi Shankar makes his formal screen appearance after interval and gives an electrifying performance – something steals the thunder from everybody including Allu Arjun. His character has the X factor that elevates the second half despite everything else coming unstuck. Rajendra Prasad whose chemistry with Allu Arjun worked in “Julayi” extends that in this film with greater length and impact. He gets many genuine laughs especially the scene where Ravi gets killed while eating lunch with Upendra. Rajendra Prasad gets the best one-liners in the film. Samantha doesn’t have the depth in her acting to supplement the over-dosage of giggly vivacity she gave us since her first film. Nitya Menen has been grossly under-utilized and she gets short shrift in every frame  – at the cost of Samantha. Since Nitya’s next film is a Mani Ratnam release, this role is neither fulfilling nor memorable. Prakash Raj – whose character is the reference point for the entire movie and climax hardly gets to speak. His dialogues must be about half a page, Trivikram could have highlighted more instances of what made Prakash Raj such a principled man – you could have built a few scenes highlighting him because the message kept ringing that he was a man who stood for public good through Anand but not from Satyamurty himself. Others like Kota Srinivas Rao and MS Narayan have a handful of impactful dialogues. MS Narayana, especially brings out tears with his hug with Rao Ramesh – it’s a pity he died while shooting for this film. The result: dubbing for MSR is done by- someone else. Brahmanandam’s character has become ad nauseum – again, demand for a “Bakra” and all that. There has to be a saner way to bring Brahmanandam to life. If one has laughed heartily in the film  – and that happens in 3-4 scenes, it is not always with Brahmi on screen.Sampath is wasted. Fights by Peter Heins are well-composed: the fight with water hosesand the one in Upendra’s house stand out for their variety. Music by DSP is not in the same league of Trivikram’s or Allu Arjun’s earlier films. All songs are mass beats or fast beats.

What undermines the film is the length – you could knock off forty minutes and still convey the kernel of the message. Trivikram has, for the first time faltered in this film. IN his bid to make an intelligent film, he lost his sharpness and clarity of thought. It is not clear how the Rs.300 crores networth ended up, how  it shrunk the lifestyle of the hero, what the company’s business is that suddenly skyrockets the valuation to ten crores, what is the connection of property papers lying with Prakash Raj and the business he is in. There is title justification but if only Satyamurty’s character is illustrated well, more key messages of relevance to today’s youth would have registered; it is important to inherit the values more than the assets of your elders. For a long time, Allu keeps mouthing clever aphorisms from Ramayana and Mahabharata which bore you like a vegetarian meal without salt and sambar. In spite of the load taken by the hero in preserving his dead father’s goodwill, there are inconsistencies in Anand’s character. He uses a short cut to fabricate stamp papers at the behest of his friend, he doesn’t reveal to Upendra first that he is not in love with his daughter but with someone else. There are inconsistencies with Upendra too – for twenty years, everybody except his wife knows his super-violent streak – that is highly implausible. Treatment-wise, the film is burdened with the same  genres that Trivikram likes to deal with. If you take “Julai and “Atharintiki Daaredi”, and mix them up with a bigger starcast, you get the experience of “S/o…”. Trivikram has mellowed in his aggression in violence and his story-telling is still a pretty above-average throwback to the old movies of B&W era where producers and directors collaborated with a mission to deliver quality films  – high in production values and high in morality. In fact, if you take many of Trivikram’s dialogues which have received dizzy heights of popularity, there is an undercurrent of old movies’ one-liners which are repackaged with modern makeup. For example, “Luck has come to give you a shake hand but Misfortune has jumped the gun to give you a lip-lock kiss.” Or something to that effect. These kind of dialogues were dime a dozen in old Tollywood films but Trivikram’s copywriting approach has sharpened the wordiness – despite sounding repetitive. He will also use one or two Telugu words which are incomprehensible to the current generation who ceased to have Telugu as their third or even optional language in curriculum. For example, in this film just like “Ayimoolagaa (Or Diagonally)” used in “Jalsa”, he uses “Manovarthi” or “Manovyatha” in the context of divorce. He creates that spark of curiosity to learn a word or two in Telugu which is lost on today’s generation. But if he has to take his story-telling to the next level, he has to prove his mettle lies beyond assembling an army of artistes, giving stars a good push, and trying genres different from each other. Otherwise, the dangers of familiarity will breed contempt. This film is alright in frames and conveys a compact story but there is no extra factor or layering in the screenplay or characterisation that makes you watch his movies again and again  – hoping to catch a new glimpse every time. He has the spark to move out of comfort zone – this movie should be a wakeup call to move out of that comfort zone in making films that test new genres and content delivery; he has the grip on narration, sense of good cinema with appeal for family audiences – even if he forgot to entertain much in this film – but he has to concentrate on more aspects than verbosity that got him massive fan base. “S/o…” finally ends in a climax that surprises you and despite a rocking first half, it leaves many things unanswered and a big void in entertainment that he forgot to fill. You can watch it once with many lags and drags but don’t bet on this film becoming a blockbuster.