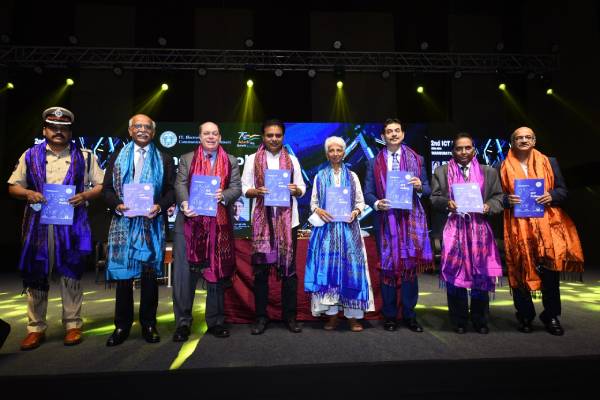 The Telangana government on Thursday unveiled its information technology policy 2021-26, aimed at doubling the IT exports to over Rs 3 lakh crore in the next five years.

Over 50,000 jobs will be generated in the IT/ITeS sector in the Tier II and Tier III cities in the state establishing them as IT Hubs of the future.

In his remarks on the occasion, Rama Rao said Telangana has seen the highest annual growth rate in IT/ITeS exports in the last 5 years in the country and has created over 2.5 lakh jobs in the sector during this period, bringing in several marquee investors.

He said that Telangana recorded a phenomenal growth in the IT/ITeS sector with at a rate of 12.98 per cent as total IT/ITeS exports stood at Rs 1,45,522 crore. Telangana’s growth rate is more than double the average national growth rate, he said.

During the next five years, the government proposed to launch several new initiatives for the development of IT/ITeS sector.

The state will set up a start-up fund worth Rs 1,300 crore and a government investment committee with a goal to support over 8,000 start-ups and making Telangana the top choice for start-ups in the country.

It will facilitate investments and create jobs in the IT, product, engineering and R&D fields to emerge as the leader in this country.

A truly contactless, paperless and presenceless government will be created with 100 per cent of government services available over web and mobile applications except in cases that mandate physical presence, like driving license tests.

The government will ensure that at least one individual in each household and Self-Help Group is digitally literate and is given access to take advantage of the digital ecosystem.

Over 12,000 Digital Telangana Centres will be set up at the Panchayat level to provide digital services to citizens even in the remote locations. Basic Artificial Intelligence training will be provided for all technology graduates to be prepared for the next wave of employment creation in the new technologies.

There will be special focus on electric vehicles, battery storage systems, consumer electronics, medical devices and automobile sectors and the state will attract over Rs 75,000 crore in investment and over 3 lakh jobs in the electronics sector.

The Telangana Emerging Technologies Corridor will be launched as a “Hub for CoEs or Technology Centres” and will be a platform for providing institutional support, thought leadership, promoting R&D and innovation in the latest trends in technology.

The policy aims at establishing Telangana as the leader in technology-based governing through the creation of the data stack, a data analysis wing and promotion of ethical usage of emerging technologies like AI, ML and Blockchain in government services.

The government will use its patented and home-grown technology solutions to support businesses, and MSMEs. A dedicated Smart Cities wing will be created in collaboration with the Municipal Administration and Urban Development Department with an aim to create over 40 smart regions in the state benchmarking with the best smart cities in the world.

Rama Rao stated that Telangana is the fourth largest contributor to the country’s economy, according to the “Handbook of Statistics on the Indian Economy 2020-21” released by the RBI.

He said the state passed several milestones in the IT and electronics sectors over last five years.

The electronics sector saw over 1.5 lakh jobs being created and Telangana is now responsible for the production of 7 per cent of India’s electronics output and growing.

He said the state developed a robust innovation ecosystem consisting of T-HUB, TSIC, WE-HUB, RICH, TASK, T-WORKS, Emerging Technologies Wing, and IMAGE Center of Excellence. Over 1,500 start-ups have received support in the form of mentorship, incubations and industry connects and have raised Rs 1,800 crore in funding over the last 5 years.