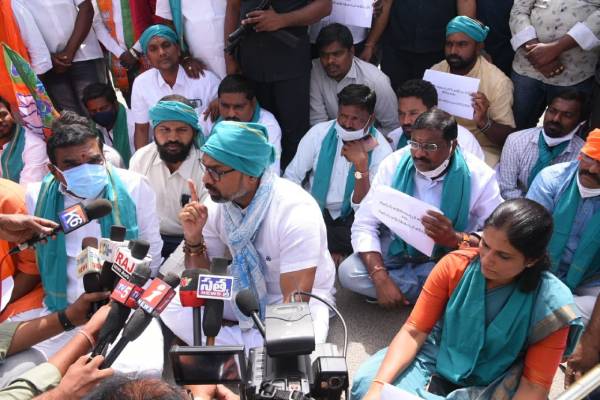 BJP MP Dharmapuri Arvind’s car and few other vehicles in his convoy were damaged in an alleged attack by TRS workers in Nizamabad district on Tuesday.

The incident occurred near Issapalli village when the MP was on his way to Nandipet village to participate in some development programmes.

The incident led to tension in the area. While the Lok Sabha member from Nizamabad blamed ruling Telangana Rashtra Samithi (TRS) for the attack, the latter claimed that farmers attacked the MP as he had failed to fulfill promises made to them before his election.

Arvind alleged that TRS workers carried out the attack on his convoy with the support of police. He alleged that the attackers were armed with knives, sticks and stones and they wanted to kill him.

The windscreen of the MP’s car and five other vehicles were damaged in the attack.

The MP said one of his party workers received stab injuries, adding that he would lodge a complaint with the Lok Sabha privileges committee and the Union Home Ministry.

Arvind claimed that 200-300 TRS workers had gathered near the village to attack him and police had colluded with them. The MP, who sat on the road to register his protest, blamed the police commissioner saying he had expressed helplessness when he requested him to clear the way.

Union Minister for Tourism G. Kishan Reddy and state BJP chief Bandi Sanjay Kumar have been informed about the attack, he said.

The state BJP chief has alleged that there is breakdown of law and order in the state and blamed Chief Minister K. Chandrasekhar Rao for this.

The BJP leader said the director general of police knew about the attack but did not nothing. “When a MP can be attacked in this state, how secure is a common man,” he asked.

Meanwhile, TRS denied involvement of its workers in the attack. The ruling party said farmers who were angry over the false promises of Arvind staged the protest.

Telangana Minister for Housing, Roads and Buildings V. Prashanth Reddy said Arvind went to the area despite police cautioning him about the protest by farmers.

The TRS leader recalled that in 2019 elections Arvind had promised to turmeric farmers that if elected, he will ensure that the Turmeric Board comes up in Nizamabad in five days.

He said the BJP leader had also promised Minimum Support Price to the farmers and had even signed a bond paper to assure the farmers. The MP “failed” to fulfill both the promises after his election and this has angered the farmers, Reddy asserted.