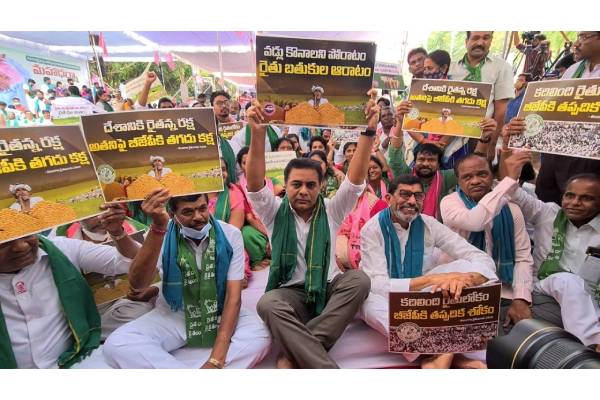 Alleging that Telangana’s farmers were suffering due to the policies of the Centre, Rao described the ‘maha dharna’ as the beginning of a struggle to protect the farmers’ interests.

KCR, as the chief minister is popularly known, declared that the movement will continue till the Centre relents and change its policies to procure rice from Telangana on a par with Punjab.

“This is just the beginning. If necessary we will go to Delhi. We are ready to take it to any extent,” said the Chief Minister while formally launching the mega protest at Indira Park in the heart of the city.

He alleged that the Centre’s policies were harming the farmers of Telangana at a time when they were moving on the path of prosperity and contributing to the country’s progress.

He declared that their protest was also in support of farmers of north India who have been demanding the Centre to take back new farm laws.

KCR’s entire cabinet, MPs, members of Legislative Assembly and Legislative Council, other elected representatives and leaders of Telangana Rashtra Samithi (TRS) were participating in the dharna, which began at 11 a.m. and will continue till 2 p.m.

A delegation of TRS leaders will later reach Raj Bhavan to submit a representation to Governor Tamilisai Soundararajan.

Dismissing BJP’s criticism for staging protests despite being in power in the state, KCR recalled that Prime Minister Narendra Modi sat on a 51-hour dharna when he was the chief minister of Gujarat.

The TRS chief said it was the responsibility of Narendra Modi to avoid a situation where the chief minister of a state has to sit on dharna.

This is the second protest by TRS in less than a week. State ministers, MPs and state legislators and other leaders had participated in the dharnas held in all Assembly constituencies on November 12.

The ‘maha dharna’ was held a day after KCR wrote to Prime Minister Narendra Modi to direct the Food Corporation of India (FCI) to enhance the target of rice procurement from Telangana.

KCR demanded that he ask the FCI to enhance the target beyond 40 lakh tonnes for procurement of rice during the ongoing Kharif 2021-22 to 90 per cent of the production as done in Punjab.

The Chief Minister also requested Modi to direct the FCI to complete the procurement of the balance 5 lakh tonnes of rice produced in Rabi 2020-21. He also sought direction to FCI to conform to the target of procurement of rice from Telangana during the ensuing Rabi season.

KCR wrote that FCI was following certain policies which were creating confusion in the minds of farmers as well as the state governments.

He pointed out that the FCI has not fixed the target of procurement for the entire year in one go and that even though the production is increasing year by year the procurement is not keeping pace.

“Due to these policies of FCI, it is becoming difficult for the states to plan an appropriate cropping pattern and explain the same to the farmers. For instance, even though the production of rice in Telangana during Kharif 2020-21 was 55.75 lakh tonnes, the procurement was only 32.66 lakh tonnes which is 59 per cent of the production. This was less than the 78 per cent procured in kharif 2019-20. Such wide variation in procurement levels does not allow the state to implement a rational cropping pattern,” reads the letter.

KCR pointed out that to clear these confusions and fix the appropriate target for procurement, he had personally met union minister for food and public distribution Piyush Goyal on September 25 and 26. “I requested that the annual target for procurement be fixed immediately. It has been 50 days since I have met the Hon’ble Union Minister but no policy decision has been taken and communicated to us,” he wrote.